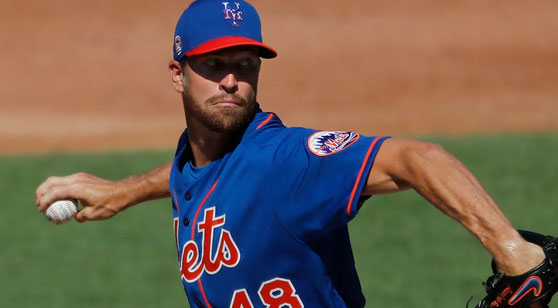 Jacob deGrom is coming off a strong start as the Mets battle the Red Sox. (AP)

With the first week of baseball almost complete, we have an incomplete picture for what we can expect for the rest of the season. We do not know if teams will continue using most of their starting pitchers for fewer than six innings a game. It is unclear what effect not having any fans in attendance is having on games. Part of the fun of watching baseball is in not knowing what to expect.

With four nationally televised games on Wednesday, there are two bets that I really like. For the 7 PM EST game on ESPN+, I am betting that over 7.5 runs will be scored between the New York Mets and the Boston Red Sox. For the 10 PM ESPN game, I am backing the Los Angeles Angels -1.5 run-line against the Seattle Mariners.

For the last two nights, The New York Mets have played the Boston Red Sox at Fenway Park. For tonight’s matchup, the venue shifts to the Mets' home stadium, Citi Field. So far in this shortened season, it is apparent that the Red Sox are a declining team. Since trading away the second-best player in baseball in Mookie Betts, the Red Sox are a mix of veteran sluggers, and inexperienced low-quality pitchers. The Mets are a sharp contrast to the Red Sox as they have a loaded lineup, a strong bullpen, and a few dominant starters.

Based on the strength of two-time Cy Young winner Jacob deGrom, the Mets are heavy moneyline favorites for this matchup. I believe the Mets -195 moneyline odds are merited so instead I am targeting the run total. Even though deGrom is on the mound, I am betting that over 7.5 runs will be scored at -115 juice.

Tonight’s starting pitcher for Boston, Nathan Eovaldi is possibly the most reliable pitcher in the Red Sox starting rotation right now. In his only start this season he pitched six innings giving up only one earned run. I believe that it is unlikely that Eovaldi replicates this performance due to a few factors.

After signing a large contract in the 2018 offseason, Eovaldi’s performance cratered in 2019. Last season, Eovaldi had a 5.99 ERA and a 5.90 FIP. Even if Eovaldi has another successful outing, I think it is unlikely that the Red Sox leave in right-hander in for more than five innings. Due to the shortened season and expanded rosters, most managers including the Boston's are relying on their starting pitchers for fewer innings.

Starting pitcher usage is an issue that is affecting the Mets as well. In his last start like most of his starts, deGrom was unstoppable. In five innings, deGrom had eight strikeouts, no earned runs, and gave up only one hit. Despite this dominant performance, the Mets yanked deGrom out of the game and replaced him with relievers. I see the same thing happening again on Wednesday. I believe that the Red Sox will pile on two to three runs against the Mets bullpen on top of the one to two runs they tack onto deGrom. That in addition to the Mets powerful lineup against Eovaldi and the Red Sox bullpen is why I am betting that over 7.5 runs will be scored.

Wednesday’s late-night matchup between the Seattle Mariners and Los Angeles Angels is projected to be a blowout Angels' victory. That projection is completely accurate as the Mariners are the only bottom feeder in the highly competitive AL West this season. The Mariners have a below average lineup, one of the worst bullpens in the league, and a young unproven starting pitcher for tonight's game. The Angels have the best player in all of baseball in their lineup in Mike Trout, and a consistent starting pitcher. That is why I am betting on the Angels not only winning but winning by at least two runs.

Most baseball games come down to starting pitching. Unfortunately for the Mariners, their starting pitcher Justin Dunn is going to be eaten alive by the Angels. Dunn is a promising 24-year old prospect who came over in the Edwin Diaz trade from the New York Mets. Last season, Dunn pitched in only 6.2 innings major league innings giving up two hits, two earned runs, and nine walks.

On paper this does not look too bad as Dunn had an ERA of only 2.70, however his xFIP was 8.15. I believe that Dunn is not ready to pitch in the major leagues and is likely to have an ERA between five and six runs before the season is over. Between Dunn’s pitching and the Mariners bullpen, I have a hard time seeing how the Angels will not pile on runs.

In the unlikely event that the Angels lineup lead by Trout, Justin Upton, and Shohei Ohtani can’t score a significant amount of runs against the Mariners, the Angels have a quality starting pitcher who can hold the Mariners to two or fewer in five innings of action. Angels' left-hander Andrew Heaney gave up only one earned run and two hits in almost five innings of action in his only start this season . While Heaney is unlikely to continue performing this well, I have a hard time seeing how he cannot replicate this performance against the Mariners lineup. That is one of the reasons why I am betting on the Angels run line at even money odds.