The rubber match of this series takes place Sunday night at Wrigley Field after Chicago routed Atlanta on Saturday, 13-4.

Kyle Hendricks returns to the mound after missing his last start due to an illness. Hendricks is winless in his first two starts (both at home), but he should be up to the challenge here to shut down a powerful Braves' lineup. 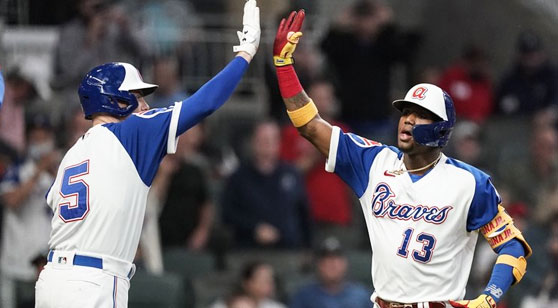 The Braves have split four series finales this season as Atlanta and Chicago close their set on Sunday night. (AP)

Atlanta and Chicago play the third game of a three-game series on Sunday, April 18 at Wrigley Field in Chicago, Illinois at 7:10 PM Eastern.

The Braves are sitting in last place of the National League East standings at 6-9, while owning a 3-5 record away from Truist Park.

Chicago is in fourth place of the National League Central at 6-8, three games behind Cincinnati for first place in the division.

The Braves and Cubs each won division titles last season, but are sitting below .500 through nearly 10% of the season. Atlanta has won only two of its first four series of the campaign, with just one series victory coming on the road at Washington.

Chicago owns the worst offense in the league, batting below .200 as a team, while scoring 34 runs in their first 13 games. However, the bats busted out in Saturday's blowout of Atlanta (more about that in the series recap below).

The Braves captured the series opener at Wrigley, 5-2 to cash as a +105 road underdog. The game remained Under the total of 8 as only one run was scored in the final four innings. Atlanta plated three runs in the fourth inning, capped off by a two-run single by Braves' right fielder Ronald Acuna, Jr. to break a 1-1 tie.

The Cubs' offense finally exploded in a 13-4 rout of Atlanta, backed by six home home runs. Willson Contreras and Kris Bryant each went deep twice for Chicago, who scored 12 total runs in its previous six games combined. Chicago cashed as +100 home underdogs, marking its first time in the 'dog role at Wrigley Field in 2021.

Wilson steps to the mound for the first time this season after compiling a 4.02 ERA in six appearances in 2020. The right-hander made only two starts last season, but one of them came in a huge spot against the eventual champion Dodgers in the NLCS.

Wilson took the hill in Game 4 of the NLCS opposite Dodgers' ace Clayton Kershaw and shut down the powerful Los Angeles lineup in a 10-2 rout as +185 underdogs. The North Carolina native allowed only one hit and one run in six innings of work, which would end up being Atlanta's final win of that series before Los Angeles stormed back with three straight victories for the pennant.

Hendricks missed his last start due to an illness on Tuesday at Milwaukee, as the right-hander seeks his first victory of the season. The ace of the Chicago staff, Hendricks lost as a -200 favorite in the season opener against Pittsburgh, while picking up a no-decision in his previous outing on April 7 against Milwaukee.

In that start, Hendricks tossed six scoreless innings and scattered four hits, but the Brewers snapped a 1-1 tie in extra innings to score three runs in the top of the 10th of a 4-2 triumph.