It's hard to ignore the rash of injuries to the Brewers right now and the struggles of their offense. The big concern going into the series opener for the Padres is trying to avoid a letdown after beating the rival Dodgers on Sunday in comeback fashion.

San Diego faces Los Angeles at Dodger Stadium this upcoming weekend so this is a big opportunity for the Padres to pick up some wins against a Brewers' team that is likely not going to the playoffs this season. 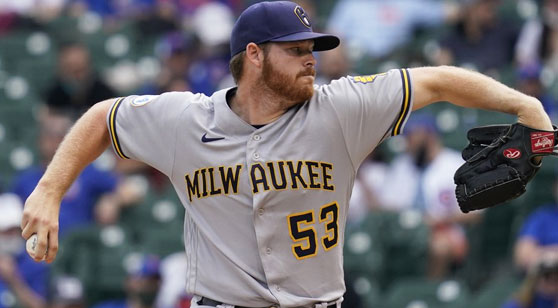 The Brewers travel west to face the Padres on Monday night as ace Brandon Woodruff takes the mound. (AP)

Milwaukee and San Diego play the first game of a three-game series on Monday, April 19 at Petco Park in San Diego, California at 10:10 PM Eastern.

The Brewers are sitting in second place of the National League Central standings at 8-7, while owning a 4-2 record away from American Family Field.

San Diego is tied for second place of the National League West with San Francisco, as the Padres are 3.5 games behind Los Angeles for first place in the division.

The Brewers face their first non-divisional opponent in National League play when they head west to start a six-game road trip. Milwaukee lost two of three games at home to Pittsburgh this past weekend and continue to play without 2018 National League MVP Christian Yelich, who is currently on the Injured List with a back injury.

San Diego avoided a sweep on Sunday against Los Angeles with a 5-2 home victory. The Padres have stumbled to a 2-4 record the last six games since starting the season at 8-3, while posting a 2-5 mark in the past seven home contests.

These teams didn't meet in 2020, but the Padres captured four of seven matchups during the 2019 season. San Diego swept Milwaukee at Petco Park in a three-game series, which included the Padres beating Woodruff, 4-1 as a heavy underdog in the middle game of that set.

The ace of the Brewers' staff doesn't have a win to his record in three starts this season, while Woodruff has won three of his last 16 decisions since 2020.

Woodruff allowed three earned runs in his first start this season against the Twins, but the right-hander has given up one run in his past two outings (13 innings). The Brewers couldn't hold onto a 2-0 lead in a 3-2 defeat to the Cubs in his previous trip to the mound on April 13, as Milwaukee owns a 2-4 record in his past six road starts since August 2020.

Musgrove received a clean slate in San Diego after spending the last three seasons in Pittsburgh. The right-hander tossed his first career no-hitter in a 3-0 triumph at Texas on April 9. Musgrove cashed as a -190 road favorite and struck out 10 batters, marking his second consecutive scoreless outing.

However, Musgrove lost in his next outing to his former team, the Pirates in a 5-1 setback at PNC Park last Wednesday as a -195 favorite. He lasted only four innings and gave up a four hits and one run, while the Under is a perfect 3-0 in Musgrove's three starts this season.