It's hard to believe that the New York Yankees own the worst record in the American League, but that's the case heading into Tuesday's interleague series with Atlanta.

The Braves aren't faring much better as they also possess a losing mark so far this season, although Atlanta is coming off a road series win at Chicago.

The New York offense has struggled mightily in spite of all the big names in its lineup, but not seeing Tampa Bay again after losing five of six to them may be a good thing for the Yankees. 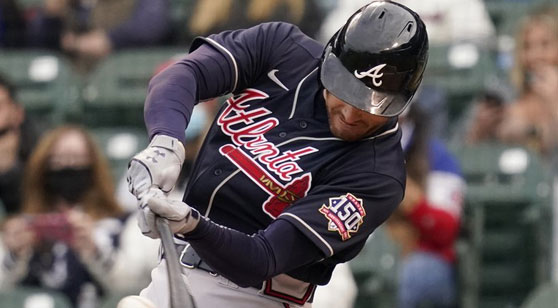 The Braves took two of three from the Cubs at Wrigley Field as they continue their road trip with the Yankees on Tuesday. (AP)

Atlanta and New York play the first game of a two-game series on Tuesday, April 20 at Yankee Stadium in Bronx, New York at 6:35 PM Eastern.

The Braves are sitting in fourth place of the National League East standings at 7-9, while owning a 4-5 record away from Truist Park.

New York is in last place of the American League East at 5-10, as the Yankees are 5 games behind Boston for first place in the division.

Both these legendary franchises have stumbled to slow starts in 2021. Atlanta recovered from a home series loss to Miami to grab two of three road games against the Cubs this past weekend, capped off by a 13-4 rout of Chicago on Sunday.

However, MVP candidate Ronald Acuna, Jr. left the game with an abdominal strain and is listed as day-to-day for the Braves.

The Yankees have been anything but impressive through 15 games, as the Bronx Bombers are coming off a sweep at the hands of the Rays at home.

New York is riding a five-game skid and its offense is nowhere to be found as the Yankees have been limited to three runs or fewer in five of the past six contests.

These teams met four times last season in interleague action as the home squad produced a perfect 4-0 mark. The Yankees knocked off the Braves in the Bronx, 9-6 and 6-3 in mid-August, but Atlanta rebounded with 5-1 and 2-1 victories at home two weeks later.

The Braves have lost two of the first three starts made by Morton, capped off by a 6-5 defeat to the Marlins his last time out. Morton closed as a -245 home favorite as Atlanta fell behind, 5-0, but the Braves tied the game and forced extra innings before losing, 6-5 in 10 innings.

As a member of the Rays' pitching staff in 2020, Tampa Bay posted a perfect 3-0 record in three starts made by Morton against New York, including an 8-4 triumph in Game 3 of the American League Divisional Series.

Taillon is winless in two starts this season with New York after spending the first four seasons of his career in Pittsburgh. The right-hander has failed to escape the fifth inning in his first two outings in a Yankees' uniform, as he was tagged for five earned runs in 3.2 innings of a 7-3 defeat to Toronto his last time out.

In his last start against Atlanta as a member of the Pirates in 2018, Taillon defeated the Braves, 3-2 as a +115 road underdog. Taillon allowed two home runs in that win, one coming off the bat of Acuna.