New York's offense has struggled off a win recently by scoring 2, 1, 1, and 1 runs in the last four off a victory.

Zach Eflin has posted strong numbers at home this season for the Phillies, while Mets' starter David Peterson put together a terrific performance the last time he faced Philadelphia with 10 strikeouts.

Look for this game to stay Under the posted total. 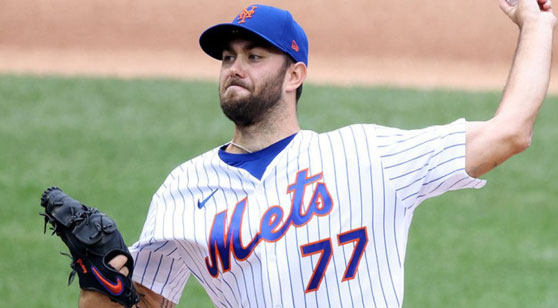 Mets' southpaw David Peterson takes the mound on Sunday night looking to beat the Phillies for the second time this season. (AP)

Not one team in the National League East division owns a winning record heading into Sunday's action.

The Mets own a 10-11 record after Saturday's 5-4 victory over the Phillies, while improving to 4-7 away from Citi Field.

Philadelphia fell below .500 to 13-14, but still share part of first place in the division along with Washington and New York.

These NL East rivals have hooked up eight times already this season as the Mets have captured five meetings.

The Phillies took two of three at Citizens Bank Park from April 5-7, but the Mets picked up revenge a week later with a three-game sweep at Citi Field.

This current weekend series has seen a pair of games decided by one run each. Philadelphia edged New York in Friday's series opener, 2-1 as +145 underdogs, despite picking up only three hits in the win.

The Mets jumped out to a 4-0 first inning lead on Saturday against former teammate Zack Wheeler, but the Phillies rebounded by scoring four unanswered runs to tie the game.

Michael Conforto hit the go-ahead home run in the ninth inning for New York to give the Mets a 5-4 win as a short underdog as the Over of 7.5 cashed..

The Phillies' lineup is a bit shorthanded as outfielder Bryce Harper and catcher J.T. Realmuto have missed the first two games of this series with injuries.

Last season, Peterson was tagged for five earned runs in only two innings of work in a 9-8 defeat to the Phillies. The New York southpaw got rocked against Philadelphia for a second time in early April by yielding six runs in four innings of an 8-2 setback on April 7.

However, Peterson rebounded in his most recent start against Philadelphia by stifling the Phillies' bats in a 5-1 home triumph on April 14 by striking out 10 batters in six innings. The Mets own a 1-3 record in Peterson's four starts this season with the only win coming in that superb performance against the Phillies at Citi Field.

Eflin is coming off his worst start of the season in a 5-2 defeat at St. Louis as the right-hander allowed five earned runs in 6.2 innings of work. The only good news was Eflin didn't walk a batter, as in 32.2 innings of work this season, he has issued only two free passes.

The Phillies are 3-0 in Eflin's three home outings this season, while he owns a 1.80 ERA at Citizens Bank Park. Somehow, Elfin has missed the Mets this season as he not faced New York since 2019.