Both the Mets and Cardinals are coming in off series wins this past weekend as New York heads to Busch Stadium this evening.

St. Louis swept Pittsburgh and is seeking a fifth straight victory tonight, but the Cardinals are slight favorites against a spot starter in New York's Joey Lucchesi tonight which could be a sign the Mets are the play. 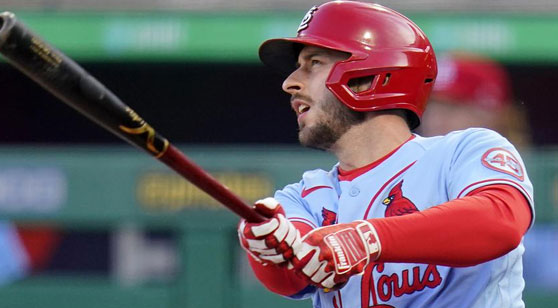 The Cardinals are fresh off a sweep of the Pirates as St. Louis returns home to battle New York on Monday. (AP)

The Mets are tied for first place in the National League East with the Nationals heading into Monday's action. New York owns an 11-11 record and 5-7 mark away from Citi Field after capturing the final two games of its series at Philadelphia.

The Cardinals sit one game behind the Brewers for first place in the National League Central at 16-12. St. Louis has won four consecutive games and is coming off a three-game road sweep of Pittsburgh this past weekend.

These teams did not play in 2020 due to the abbreviated schedule, but St. Louis captured five of seven matchups from New York in the 2019 campaign.

The Cardinals won two of three meetings at Busch Stadium, while the Redbirds took three of four showdowns at Citi Field.

The Mets' southpaw is making his third start of the season, but he hasn't lasted more than three innings in any of his two previous outings. Lucchesi came over to the Mets in the offseason from the Padres and hasn't been able to get New York in the win column yet.

New York is 0-2 in Lucchesi's two starts this season, but the left-hander has not walked a batter in five innings of work, as this will look to be a bullpen-by-committee game for the Mets.

The veteran right-hander has put together a strong pair of starts in his last two trips to the mound in spite of the Cardinals losing both games.

Wainwright struck out a season-high 10 batters in seven innings of a 3-2 defeat at Washington on April 20, then followed up that performance by tossing a complete game an striking out eight in a 2-1 setback to Philadelphia his last time out.