Philadelphia is coming off a tough extra-innings loss to Atlanta last night as the Phillies blew a pair of three-run leads.

The Phillies send out their ace Aaron Nola to stop the bleeding tonight as Philadelphia has won eight of the past 10 games off a loss. 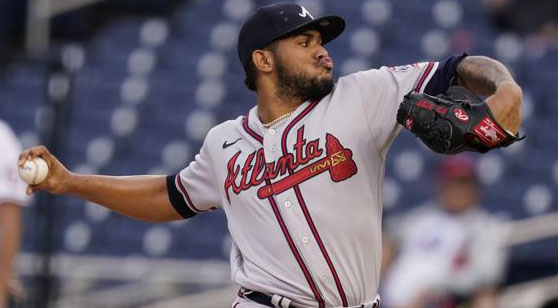 Braves' right-hander Huascar Ynoa takes the mound tonight as Atlanta and Philadelphia play the rubber match of their series. (AP)

The National League East is currently the tightest race in baseball with last place Washington sitting 2.5 games out of first place.

The Phillies enter Sunday's action tied with the Mets for first place, as Philadelphia owns an 18-16 record, but 5-10 mark away from Citizens Bank Park.

Although the season is five weeks in, these NL East rivals will be completing their third series of the season tonight.

The Phillies swept the Braves in Philadelphia to begin the season, but the Braves rebounded with a home series victory less than a week later.

This current series has seen a pair of high-scoring affairs, starting with Philadelphia routing Atlanta on Friday night, 12-2 as +125 road underdogs.

The Braves rebounded on Saturday by overcoming an early 3-0 deficit to tie the game in the ninth inning, followed by a wild 12th inning as Philadelphia scored three runs, only to be outdone by Atlanta's four-run barrage in the bottom of the inning for the 8-7 triumph.

Philadelphia has captured five of the eight matchups this season, and the Phillies are 2-0 in the two series finales.

Nola is unbeaten in his previous three decisions, coming off a 6-5 victory over the Brewers in which he struck out 10 batters in six innings of work.

Earlier this season, Nola tossed 6.2 innings against the Braves in a 3-2 extra-innings triumph, marking the sixth time in the last nine starts that the Phillies have beaten Atlanta when the right-hander takes the mound.

Ynoa has turned into an excellent addition for this Atlanta rotation as he is coming off three straight victories.

The right-hander was nearly a one-man show in his last start at Washington as not only did he limit the Nationals to four hits and one run in seven innings, but Ynoa also provided a grand slam in a 6-1 rout.

The Braves are 2-1 in Ynoa's three home starts this season, while the third-year hurler owns a 1.56 ERA at Truist Park.