Boston has taken each of the first two games against New York this weekend. The Yankees' offense is back to their slumping ways by scoring three runs or less for the seventh time in nine games.

The Red Sox are looking to close out this tough road trip on a four-game winning streak and getting them as a nice-sized underdog is worth a strong look against New York tonight. 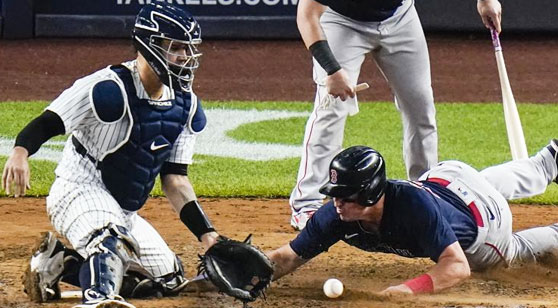 The Red Sox have captured each of the first two games with the Yankees in their weekend set in New York. (AP)

The Yankees slipped to fourth place in the AL East at 31-28 after suffering their third straight loss on Saturday. New York's offense has produced the second-fewest runs in the American League with 218, which is only one better than Detroit, who is currently 10 games below .500.

Boston captured the first two meetings of the weekend series at Yankee Stadium. The Red Sox jumped out to an early 3-0 lead on Friday night and held on for a 5-2 victory, as the game stayed 'under' the total of 9 runs.

On Saturday night, the Red Sox emerged victorious again, this time overcoming a 2-0 deficit to score three runs in the sixth and four runs in the eighth of a 7-3 triumph. Four Red Sox posted two hits apiece, while first baseman Bobby Dalbec went deep in the eighth to put the game 'over' of 9.5 runs.

Richards had won three consecutive starts in May before losing consecutive outings to Atlanta and Houston. The right-hander didn't pitch poorly in those starts by giving up five earned runs in 11.2 innings of work, but Boston's offense also scored a grand total of two runs in those contests.

Boston is currently on a 6-2-1 run to the 'under' in Richards' last nine starts, while the former Angels' hurler owns a 2.59 ERA away from Fenway Park.

Since the Yankees lost German's first two starts of the season, New York has compiled a 7-1 mark in his past eight trips to the mound.

German is coming off a home underdog win over the Rays his last time out, while striking out at least five batters for the ninth consecutive start.

The Yankees are 3-2 in German's five home starts this season, while both games have gone 'under' when he is listed as a home favorite of -140 or higher.