Chicago has lost only three home games since the start of May as the Cubs look for the sweep of the rival Cardinals on Sunday night.

Zach Davies has held his own when pitching at Wrigley Field and it's hard to deny St. Louis' recent road woes. 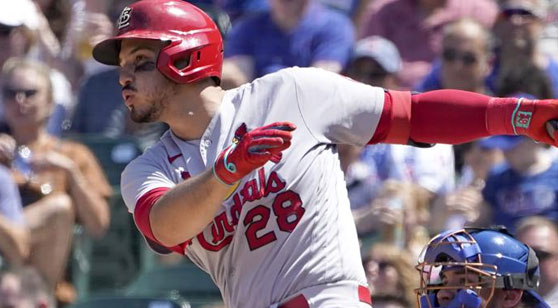 Nolan Arenado and the Cardinals look to avoid the sweep against the rival Cubs on Sunday night. (AP)

The Brewers and Cubs remain tied atop the National League Central after both teams won on Saturday. Chicago enters Sunday's action owning a 37-27 record, including a National League-best 23 victories at home.

The Cardinals have slumped to a 32-32 record after dropping 10 of their past 12 games, including a 1-5 mark the last six contests away from Busch Stadium.

Chicago has captured four of five matchups from St. Louis this season, including each of the first two games this weekend at Wrigley Field.

The Cubs erased a 5-1 deficit in Friday's 8-5 triumph as a -145 favorite, as first baseman Anthony Rizzo hit the tying home run in the sixth inning and Joc Pederson gave Chicago the lead for good with a two-run double in the seventh.

On Saturday night, it was all Chicago as Pederson homered for a third straight game in a 7-2 rout. After St. Louis scored an early run, Chicago rebounded with five runs in the bottom of the second inning and never looked back.

Martinez has been hit hard in his last two trips to the mound by allowing 15 earned runs in losses to the Dodgers and Indians.

The right-hander has cashed the 'over' in four of his previous five starts, as opponents have plated at least eight runs in four of those contests.

Davies overcame a slow start to the season by yielding one earned run or less in five of his last seven outings, as the Cubs are 5-2 in those games.

Chicago owns a 5-1 mark in Davies' six starts at Wrigley Field, while the veteran right-hander tossed five scoreless innings in a 2-1 triumph at St. Louis in late May.