San Francisco seeks a fourth straight win prior to the All-Star break after beating Washington in each of the first two meetings at Oracle Park.

Kevin Gausman has posted a dominating stat-line in the first half for the Giants as he looks to bounce back from a pair of winless outings.

The Nationals are sputtering down the stretch and are tough to back here, even as a heavy underdog. 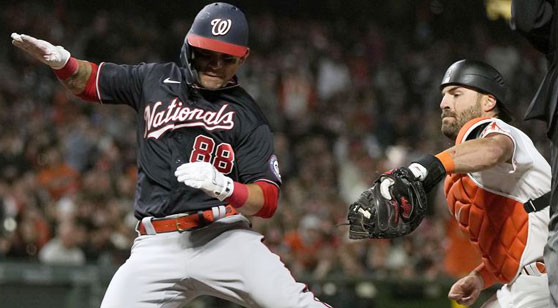 The Nationals try to avoid the sweep on Sunday at San Francisco in the final game before the All-Star break. (AP)

As predicted by everyone who follows baseball, the San Francisco Giants would be leading the National League West and own the best record in the game at the All-Star break.

The Giants owned a season win total of 75.5, but are 20 victories away with 74 games remaining to hit the 'over.'

San Francisco sits atop the NL West at 56-32, while improving to 29-13 at Oracle Park after beating Washington each of the last two days.

The Nationals are two seasons removed from winning the World Series, but Washington is going to enter the All-Star break below .500.

Granted, Washington posted a 19-31 record in the first half of 2019 before winning it all, but the Nats are stumbling now by losing eight of their past 10 games, including blowing an 8-0 lead in Thursday's 9-8 setback at San Diego.

The Giants held off the Nationals on Friday night, 5-3 as San Francisco used eight pitchers to secure the victory.

With the various injuries that have hit the Washington rotation this season, Fedde has shown some bright spots during 2021.

The right-hander didn't allow a run in three consecutive starts earlier this season, but Fedde has given up 11 earned runs in his last two starts, capped off by a 7-4 defeat at San Diego on Tuesday.

Fedde did limit the Giants to four hits in five scoreless innings, while striking out seven in a 2-0 home victory at Nationals Park on June 12 as a +145 underdog.

If it wasn't for Jacob deGrom, Gausman would be under strong consideration for the National League Cy Young award.

The former Orioles and Braves' right-hander is having a breakout season as the ace of the San Francisco rotation by allowing two earned runs or less in 15 of 17 outings, while tossing at least seven innings seven times.

Gausman was coasting in his last start against St. Louis by taking a no-hitter into the seventh inning, but the Giants lost, 5-3, marking the second straight defeat San Francisco endured in his past two appearances.

The last time Gausman faced the Nationals was opposite Fedde last month in that 2-0 setback as the Giants' hurler lasted four innings (in a seven-inning game) and gave up both Washington runs.