These old rivals have played a pair of low-scoring games so far this weekend at Yankee Stadium and that trend should keep up.

New York pulled out its first victory against Boston this season in last night's triumph as Jameson Taillon looks to give the Yanks a series win tonight.

If not for a bullpen meltdown his last time out, the Yankees would have won five straight starts made by Taillon and he should step up again tonight in the spotlight against this tough Boston lineup. 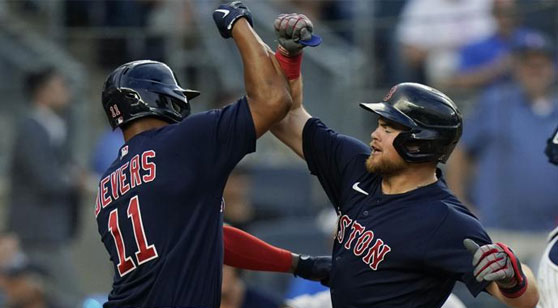 The Red Sox have taken seven of eight meetings from the Yankees as the teams play their series finale on Sunday night. (AP)

The Red Sox remain atop the American League East standings at 56-37 in spite of falling to the Yankees on Saturday night, 3-1 in six innings.

New York withstood a driving rainstorm in the sixth inning as catcher Gary Sanchez and shortstop Gleyber Torres hit back-to-back home runs to to break a 1-1 tie as the game was called after that inning.

It took eight tries, but the Bronx Bombers finally beat the Red Sox for the first time this season to improve to 47-44, but New York still sits eight games behind Boston for the top spot in the division.

Four of the past five meetings between these rivals have finished 'under' the total, while the Yankees have scored three runs or fewer in seven of the eight matchups.

Perez caught fire prior to the All-Star break as the Red Sox won four of his final five starts, including two away from Fenway Park.

The southpaw allowed seven earned runs in his last five trips to the mound, although Perez yielded six hits and three earned runs in 3.2 innings of an 11-2 blowout loss to the Phillies on July 10.

Taillon is 3-0 in his past four decisions and would have been a perfect 4-0 if the New York bullpen didn't blown a 7-2 ninth inning lead in a shocking 8-7 defeat last Sunday.

In the right-hander's last start against the mighty Astros' lineup, Taillon allowed three hits and two runs (both on homers) in six innings of work as he left with a 3-2 advantage, but New York couldn't hold on.