It's been a tough weekend in the Tampa Bay area for the Red Sox, who look to avoid the sweep on Sunday night against the defending American League champions.

Boston squandered an early 3-0 lead in Saturday's 9-5 setback, but send out Nick Pivetta, who has shut down this Tampa Bay lineup in two starts this season.

The Sox have not been swept on the road this season and will likely keep that trend going on Sunday night. 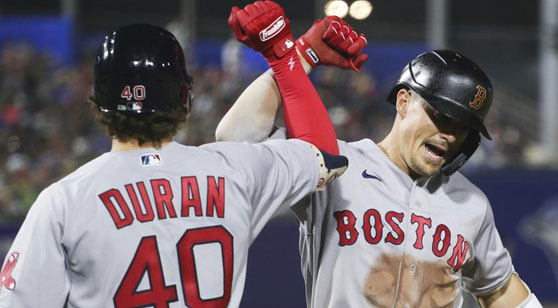 The Red Sox and Rays finish off their series on Sunday night with first place in the AL East on the line. (AP)

The Rays are back in first place of the American League East after taking the first two games from the Red Sox at home.

Tampa Bay improved to 63-42 on the season after holding off Boston on Saturday night, 9-5 as short favorites.

Boston lost the opener on Friday night, 7-3 and after falling on Saturday (which included leaving the bases loaded in consecutive innings), the Red Sox slipped into second place at 63-43.

After Boston captured the first four matchups with Tampa Bay (including a home sweep in April), the Rays have rebounded with four straight wins over the Red Sox, all coming at Tropicana Field.

The right-hander started off this season on fire as Boston won nine of his first 10 starts, while allowing two earned runs or less six times.

However, Pivetta has tapered off lately by giving up four earned runs in three consecutive outings, although the Red Sox have won his last two starts.

Pivetta has been a strong 'under' pitcher to back since June as Boston is 8-2 to the 'under' in his last 10 trips to the mound.

The former Phillies' hurler has had Tampa Bay's number this season by not allowing a run in two starts, although the Red Sox split those two games (one loss came by 1-0 score).

The Rays won five of McClanahan's first six starts, but Tampa Bay owns a 3-6 record in his past nine outings. However, Tampa Bay is 3-1 in the southpaw's last four opportunities at Tropicana Field.

McClanahan has allowed three earned runs or less in 13 of 15 starts this season, while hitting the 'under' in six of his past nine trips to the mound.

The former University of South Florida standout has not faced the Red Sox in his career, while coming off a loss in his last appearance against the Yankees on July 27 in a 4-3 home defeat.