New York has completely fallen apart in August and fallen out of first place in its division. The Mets try to avoid the sweep tonight against the defending World Champion Dodgers.

The task won't be easy as Dodgers' ace Max Scherzer takes the mound, coming off a rain-shortened start against the Phillies.

The Mets have lost both games in this series in extra innings and the confidence is not high in Flushing, as the Dodgers are the look on Sunday night baseball. 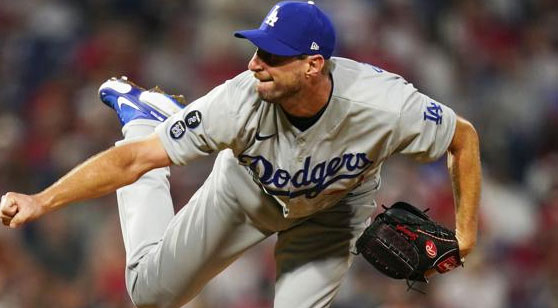 Max Scherzer makes his third start as a Dodger when Los Angeles wraps up its series at New York. (AP)

The Dodgers remain four games out of first place in the National League West in spite of winning six of their past seven contests.

Following a series victory at Philadelphia to being its East Coast road trip, Los Angeles is seeking a sweep at New York, coming off a pair of extra-inning triumphs.

The Dodgers squandered a 4-0 lead in Friday's series opener only to hold off the Mets, 6-5 in 10 innings, followed by a 2-1 win on Saturday night. Cody Bellinger provided the go-ahead RBI double in the 10th inning as both the Dodgers and Mets scratched out four hits apiece.

The Mets are still within striking distance of first place in the National League East by sitting 1.5 games behind both the Phillies and Braves, but New York enters tonight's series finale in a 5-11 slump the last 16 contests.

Scherzer makes his third start since getting dealt from the Nationals at the trade deadline. The three-time Cy Young winner lasted only 3.1 innings in his previous outing at Philadelphia, but that was only because of a lengthy rain delay in a 5-0 Los Angeles victory.

Amazingly, Scherzer did not face the Mets this season as a member of the Nationals, but did win in his only start at Citi Field in 2020 as a -155 favorite, 2-1 last August by tossing six innings and allowing one run.

This season, Scherzer's teams are combined 4-0 when he starts as a road favorite of -125 or higher.

It's been a lost season for the former Cleveland hurler as Carrasco missed the first four months with a torn hamstring. Carrasco hasn't pitched past the fifth inning in any of his three starts, while allowing four earned runs in one inning against Washington his last time out.

The Mets are 2-1 in Carrasco's three starts, although he has not received a decision yet. New York held off Washington and Miami in his past two appearances, but the Mets lost at home to the Reds in his first start on July 30, despite allowing three hits and one run in four innings of work.