The Dodgers are within striking distance of the Giants for the top spot in the National League West by sitting three games back entering Thursday's action.

The Mets have been ice-cold until winning at San Francisco and send out Taijuan Walker to the mound tonight, who is coming off an encouraging start against the Dodgers his last time out.

The Dodgers are saving their aces for the weekend and are going to a bullpen game tonight, which could work in New York's benefit tonight. 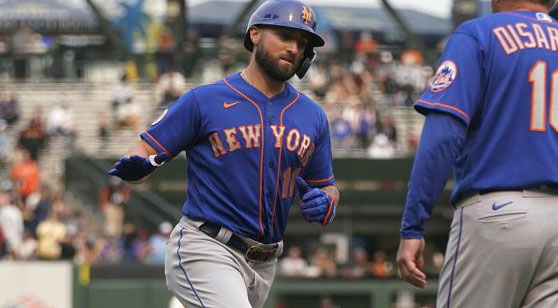 The Mets picked up a much-needed win on Wednesday by picking up the tying run in the ninth inning and outlasting the Giants, 6-2 in 12 innings.

New York snapped a five-game slide during this murderous stretch in which they faced the Dodgers and Giants in the last two series.

The Mets are back at .500 by owning a 60-60 record, but New York has slipped to 4.5 games behind Atlanta in the National League East after leading the division at the All-Star break.

The Dodgers are heating up at the right time after taking care of business of the lowly Pirates in a three-game home sweep.

Los Angeles allowed four runs in the three victories, capped off by a 9-0 blowout on Wednesday as a hefty -300 favorite.

These teams met last weekend at Citi Field as the Dodgers captured all three games against the Mets, including a pair of extra-inning triumphs.

Since the All-Star break, the Mets are 1-5 in Walker's six starts with the lone victory coming in which New York erased a 6-0 deficit to beat Pittsburgh.

Walker is winless in his last five outings, including road defeats at Miami and Philadelphia. However, Walker pitched his best game in this stretch against the Dodgers last Saturday in a 2-1 setback by allowing one earned run in 6.2 innings of work.

The Dodgers are going through another bullpen game tonight after doing so on Wednesday. Los Angeles is saving its two aces Walker Buehler for Friday and Max Scherzer for Saturday.

Knebel, the former Brewers' closer, makes his first start of his career, while taking the mound for his 13th appearance of the season. The right-hander last pitched on Tuesday in relief against Pittsburgh, tossing 1.1 scoreless innings in a 4-3 victory.