Los Angeles has struggled to score runs in this series against Cleveland by plating one run in each of the first two losses.

Cal Quantrill has pitched well the last two months for Cleveland, but he struggled to get wins during this span.

The Angels have seen plenty of success in road series finales (10-3 the last 13) and should avoid the sweep on Sunday night. 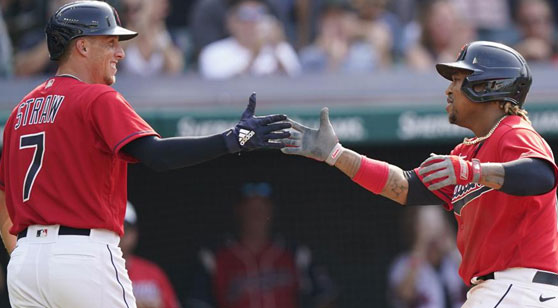 The Indians have captured the first two matchups with the Angels as they seek the sweep on Sunday. (AP)

Both these teams are 8.5 games behind the Athletics for the second Wild Card spot in the American League as the Indians go for the three-game sweep of the Angels.

Cleveland moved to one game within .500 after pounding Los Angeles, 5-1 on Saturday as -125 favorites. Angels' star Shohei Ohtani struck out three times, while Jose Ramirez and Amed Rosario each hit home runs for Cleveland.

The Angels entered the weekend on a 25-4 run since late May against teams with losing records, but have scored a total of two runs in each of the first two losses at Cleveland.

The Indians have not won three consecutive games since before the All-Star break when they swept the Royals, while Cleveland is off back-to-back wins for the first time in August.

The left-hander pitched well against the red-hot Yankees his last outing by allowing two earned runs and four hits in five innings of a 2-1 defeat.

Unfortunately, the Angels are 1-4 in Suarez's last five starts, while L.A. has scored three runs or fewer in the four setbacks in this span.

Quantrill has been a reliable arm in the Cleveland rotation since the start of July by posting a 2.41 ERA in his last nine starts.

However, the Indians have lost five of Quantrill's last six starts, but Cleveland is currently on a seven-game 'under' streak when the right-hander takes the mound.