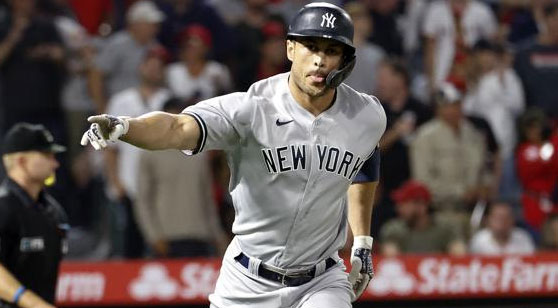 Giancarlo Stanton and the Yankees seek the three-game road sweep of the Red Sox on Sunday night. (AP)

One week remains in the regular season as the Yankees and Red Sox are tied atop the Wild Card race at 88-67. New York and Boston still have a little bit of breathing room ahead of Seattle and Toronto, but the home-field advantage is on the line for the one-game playoff.

New York has won five consecutive games and 10 of the past 14 contests since a seven-game skid in early September.

The Yankees rolled the Red Sox in Friday's series opener, 8-3 behind Giancarlo Stanton's four runs batted in, while the Yankees' slugger drilled the go-ahead grand slam in the eighth inning of Saturday's 5-3 triumph at Fenway.

New York is 5-0 in the five last meetings with Boston, as the Red Sox have been limited to three runs or less in all five of those losses.

The southpaw ended a four-start winless slide with a 7-1 victory over the Rangers his last time out. Montgomery has allowed one earned run or less in five of the past six starts, but the Yankees are 2-4 in this stretch.

New York owns a 1-3 mark in Montgomery's four starts against Boston this season, including an 0-2 mark at Fenway Park. The lone victory came in his last outing against the Red Sox in a seven-inning affair in mid-August, 5-3, as three of the four starts stayed 'under' the total.

Rodriguez has pitched well in September