Following a somewhat hostile joint practice at the Jack Hammett Sports Complex in Costa Mesa, California, the Los Angeles Chargers and San Francisco 49ers will square off for a “friendly” intrastate preseason exhibition on Sunday night – and NFL Network has you covered with all the action.

After sitting out the Chargers’ preseason opener against the Rams, Justin Herbert will make his preseason debut at L.A.’s SoFi Stadium on Sunday night – which is a breath of fresh air for Los Angeles, considering Chase Daniel and Easton Stick combined for just 147 yards without a touchdown (83.7 QBR) during the Bolts’ uneventful victory over Sean McVay’s considerably well-rested squad (W,13-6).

On the other hand, the 49ers head into Sunday’s bout currently sitting on a slight quarterback dilemma, considering San Francisco already possesses a one-hundred-million-dollar man under center in Jimmy Garoppolo – but 2021 first-round draft pick, Trey Lance, appears to be well within striking distance of nabbing the Niners’ starting job.

I’ll lay the points with San Francisco here, as Herbert is currently in no danger of losing his job to either of L.A.’s backups., so I expect the Chargers to continue slowly easing their young QB back into things – but I still believe Lance and Garoppolo both have something to prove before the end of this Niners’ preseason quarterback battle, which should result in San Francisco generating a decent amount of offense throughout this one. 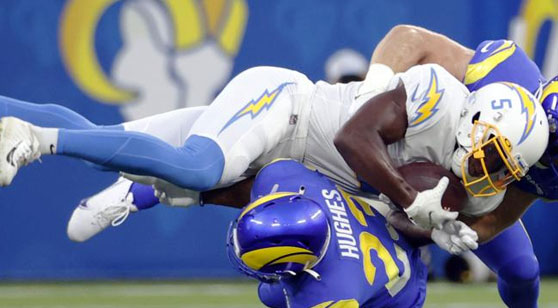 The Chargers held off the Rams last week in their preseason opener as L.A. faces San Francisco on Sunday. (AP)

After signing a five-year 137-million-dollar deal with the 49ers just a few years back, Garoppolo was quickly sprung into a pressure-filled situation ahead of his fifth season in San Francisco, considering the Niners’ front office opted to select a quarterback with the third overall pick in this year’s draft – as opposed to beefing things up on the defensive side of the ball, or adding pass protection on the offensive side.

Herbert, on the other hand, also heads into this year feeling a hefty amount of pressure in Los Angeles, but Herbert’s pressure seems to primarily center around “living up to heightened expectations,” – considering the reigning rookie of the year closed out last season by leading the Chargers to four straight victories, promptly solidifying the majority’s assumptions about L.A.’s handful of one-possession losses prior to its winning streak.

All that said, the remainder of Herbert’s story with Los Angeles will inevitably be told across the regular seasons to come, as preseason exhibitions don’t technically “count” towards actual records and statistics – but as for Garoppolo and Lance, the battle for San Francisco’s starting job already appears to be in full-swing, which is why I’m rolling with the Niners’ on Sunday evening.