Hard not to be the preseason winners of this division if you are the New York Mets with the moves they made during the offseason, adding Francisco Lindor to the middle of an infield that's got one of the best starting rotations in baseball pitching in front of them.

No matter how New York constructs their rotation throughout the year, they are going to be sending a stud or former stud to the mound nearly every night. That alone is going to win a lot of games for this team.

The Mets aren't the only team in this division with a strong pitching staff from front to back, as Washington's built in a similar mold. The former World Champs still have a trio of Scherzer, Strasburg, and Corbin at the top, and they've added a name like Jon Lester (among others) to that staff.

The Nationals also have the player with the best NL MVP odds within this division in Juan Soto, and the entire Nationals lineup is built to churn like a machine when everyone is contributing. Adding a power bat like former Cub Kyle Schwarber won't hurt Washington's chances either.

Former Nationals slugger Bryce Harper is still out in Philadelphia, playing for a Phillies team that's built to win games one way: with their offense. The nightly lineup the Phillies can throw out there each night will be downright scary for some opponents, but how successful that method of team building works in a division with multiple teams loaded with multiple pitchers remains to be seen.

Based on the Phillies price, there isn't a whole lot of optimism that this team can be the best of the bunch in the NL East, and it's because their pitching is a huge question mark. Does make Philly a good candidate to be an 'over' team for game totals early in the year if the bats start out the season hot, but they deserve to be ranked 4th in this division because of that pitching, even if the price does feel a little too high.

The Braves also deserve to be the favorites to repeat as division champs, even if the price margin is slim between themselves and the Mets. Atlanta won this division in the “sprint” last year by four games, over the Marlins mind you. The three likely contenders to Atlanta's crown this year were all at least seven full games worse than the Braves a year ago too.

A full 162-game race track for these teams to run out in deciding the standings can help those chasing the Braves, but the Braves are built to do everything well, and if they execute on that level again this year and get a MVP-caliber performance reigning winner Freddie Freeman (or Acuna, Albies etc), it's going to be tough to see the Braves getting dethroned here.

Can't fault anyone for liking any one of those four teams at the top to take this division title down. There are all highly positive cases for each of those organizations where a 95+ win campaign is how 2021 plays out for them, and the prices are definitely there for Nationals and Phillies backers.

Not so sure that's the case with the Mets price, but that team should do big things in 2021. How big remains to be seen.

Since there are arguments to be had for four different teams in this division to be division champs, you can't deny that the team that does outlast the bunch will have done so having been tested plenty.

That can only be looked at as a good thing in terms of futures numbers down the road for the NL East winner, as they'll be comfortable and confident against anyone, like say, a favored L.A. Dodgers or San Diego Padres team in the NLCS.

Saying that is all well and good in theory, but it still puts us back to the original question of where a bettor would be willing to go in the NL East Division markets. Doubling up or splitting a unit on the same team to win the division and pennant is always an option as well, as the latter market does keep alive a playoff run from a Wild Card seed as well.

At least one of the Wild Card berths in the NL could easily come from this division, so even going with the approach of mitigating any division risk with a bigger stake on a pennant future can be the route to go too.

Finally, for bettors that are the big time believers in everything the Mets have done and what they expect to get in returns from those moves this year, skipping over the division markets and getting about 5-1 on them to make the World Series could be the way to go.

New York's pitching staff should be able to hold their own against the likes of the Dodgers/Padres etc, and the protection against a Mets sluggish start (as they adapt to the changes) costing them the division is worth the price/risk trade off in my opinion. 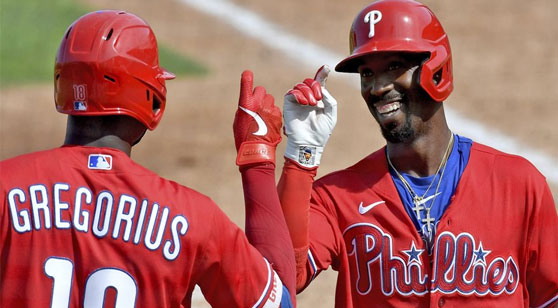 Following a disappointing 2020 season with high expectations, the Phillies look to rebound and make it to the top of the NL East. (AP)

Again, any Mets bettors should add a World Series ticket to any other futures they are holding on New York, and there's probably no way, or need to convince them otherwise.

On paper, New York's got all the pieces in place to go off and win a title if everything breaks right for them, and at that price they are still tied with the Braves for the 3rd best price for any NL team, meaning the likelihood of it happening isn't like that play is going way out on a limb or anything.

Same thing goes for the Braves in the identical situation for bettors that believe they still aren't getting their due for how good they really are.

The Nationals and Phillies are interesting cases for the World Series market in that for them to reach this position and those play(s) having a chance to cash, the season for that team had to have gone extremely well.

If that's the case, and that's the belief for a bettor, going heavier with the stake on the Nats/Phillies to win the division and/or pennant would probably be my preferred way to go there.

It is only one extra series, but the Phillies rotation as is would have a severe challenge against any AL World Series representative, and Washington can rely on their pitching too much that things look really bad when the pitching isn't there.

Having a bit more stake at 6/1 or 8.75/1 on those teams for the division or their 20/1 prices to just make the World Series is still going to be a nice payday.

Outside of 2020, two of the previous six seasons saw the NL East winner finish with exactly 90 wins, so as contrary as it may sound in relation to those previous team futures to win various banners, looking at the 'unders' on either the Braves or Mets is definitely an option for those looking to fade those teams in 2021.

If all four teams at the top are good, a Miami 'under' is worthy of consideration, but the Marlins held their own just fine last year. A longer season only hurts Miami's chances of sustaining that level of play, but they are a team that probably lands within two or three games on either side of that number.