The 2019 World Series concluded in thrilling fashion as the Washington Nationals outlasted the Houston Astros in seven games to capture their first championship in franchise history. 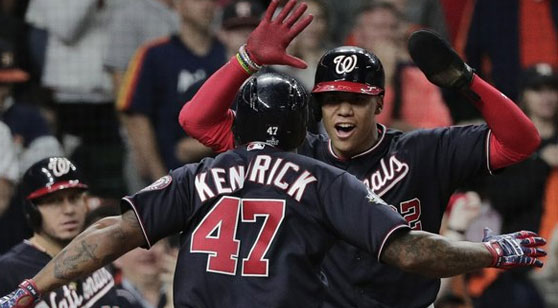 The 2020 season begins in late March and bettors can start wagering on who will win the World Series. There has not been a repeat champion in the World Series since the New York Yankees won three consecutive titles from 1998-2000.

The highest favorite listed that did not make the MLB playoffs last season is the Phillies, who are 16/1 odds, while the 2018 World Series champion Red Sox are listed at 20/1 betting odds to win the 2020 playoffs.

How do I bet on the World Series?

It’s very simple to bet on the World Series and the MLB Future Odds market is always open for business.

To figure out your Win Amount, a bettor would take the betting odds offered on a team and multiply by the amount wagered.

In the above example, the Yankees have their MLB future odds listed as a 20/1 betting choice to win the World Series.

You would collect $2,100, which includes your win and stake ($100). The stake is the initial dollar amount that you wager on the MLB future, either at a sportsbook or through an online sportsbook.

Bettors viewing their odds in American Format would see the Yankees listed at +2000 and if you prefer Decimal Odds, then New York would be seen as 21.00.

What’s great about betting on the World Series and MLB Future Odds is that there are plenty of betting opportunities for players throughout the season. Often in the MLB season, you’ll see teams start out slow in April and May, only to rally and make the playoffs. Forecasting the turnaround isn’t easy but the returns are often great and the risk is very low in the MLB Futures market.