The team to score first in all three previous games of the 2020 World Series has not only won, but never trailed. That has somewhat mitigated both bullpens, especially since each game has been decided by at least two runs.

This little nugget is worth keeping in mind when betting on Game 4 on Saturday night. The Tampa Bay Rays will be the nominal hosts against the Los Angeles Dodgers with the first pitch taking place a little after 8:00 p.m. ET on FOX. 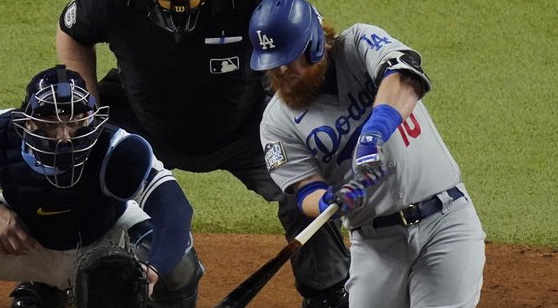 Justin Turner and the Dodgers have won nine of their 11 playoff games by two or more runs in the 2020 postseason. (AP)

Charlie Morton could never get into a rhythm on Friday night. The veteran pitcher surrendered a solo home run to Justin Turner in the first inning, and he was run midway through the fifth inning after giving up five earned runs.

That was more than enough for Walker Buehler. The Dodgers’ ace pitched a gem, striking out 10 while only allowing three hits and one earned run in six innings. Buehler became the first pitcher to strike out 10 batters in six innings or less of work in a World Series game.

Los Angeles led 5-1 after the five innings and 6-1 going into the bottom of the ninth inning. Then, Randy Arozarena of Tampa Bay hit a two-out solo home run in the last go 'round for Tampa Bay.

That extra run cut the lead to 6-2 and helped 'over' (7.5) bettors connect for the third straight game in the World Series.

The Dodgers improved to 2-0 as run-line favorites in this series and they have now won 9 of 11 playoff games by two or more runs in 2020.

Manager Kevin Cash announced that Ryan Yarbrough will be Tampa Bay’s Game 4 starter yesterday. Yarbrough was used in relief in Game 1, and he allowed two hits in 0.2 innings of action.

The Dodgers will ask Julio Urias to put them within one game of winning their first World Series title since 1988. Urias has been electric in these playoffs. He has filled any role Dave Roberts has asked him too, throwing 11 innings of relief and five innings as a starter. In 16 innings, he has allowed just seven hits, and his lone earned run came off a solo home run.

Urias has great stuff and a 9.0 K/9 with a 0.63 WHIP and a 0.56 ERA in four appearances this postseason. He was roughed up in last year’s playoffs, but he has bounced back in a big way.

The Rays won’t be using John Curtiss, Ryan Sherriff, or Shane McClanahan after all three relievers saw at least an inning of work last night.

There’s an outside chance Ryan Thompson sees the mound since he only threw six pitches in the eighth inning, but it’s likely that Tampa Bay sticks with the big three of Pete Fairbanks, Nick Anderson, and Diego Castillo. Yarbrough isn’t expected to throw a lot, so those three relievers are likely to see a lot of action.

Blake Treinen and Kenley Jansen are going to be unavailable for the Dodgers in Game 4, but Roberts can still use Brusdar Graterol after the flamethrower only threw seven pitches last night. Pedro Baez, Joe Kelly, Alex Wood, and others are all ready to go though.

The first six hitters are continuing to rake in this series. Mookie Betts, Justin Turner, and Max Muncy all had two hits on Friday night, and all six players reached base for the third straight game.

Turner got this offense going with his solo shot in the first inning and a double in the third inning, and he made a little bit of history with the blast. He tied the legendary Duke Snider for the most career postseason home runs in Dodgers’ history with 11 dingers.

Austin Barnes finally got his bat going too. Barnes is a defensive catcher that always bats at the bottom of the order, and he failed to record a hit in the first two games against the Rays.

However, he gave his team some insurance runs with a beautiful squeeze bunt in the fourth inning and a solo blast in the sixth. This is Barnes’ best postseason by a mile, as he is now hitting .350.

Don’t tell Mookie Betts that the stolen base is dead. Betts stole two bases in Game 1, and he repeated the feat with two steals in Game 3. The 2018 AL MVP has thrived in his first postseason with the Dodgers, and he currently has an OPS over .900.

The Rays lost Game 3, but Randy Arozarena continues to astound. Arozarena broke Derek Jeter’s record for hits by a rookie in the postseason with his eighth home run of the 2020 MLB playoffs. He is now one of just four players to hit eight home runs in a single postseason.

Manuel Margot is the only other Tampa Bay player hitting the ball well. Margot has four hits in 10 at-bats in the World Series for the Rays, making him the only player with a hit in each game against the Dodgers. He was never a great hitter in his four seasons with San Diego, but he has caught fire this postseason.

Mike Zunino needs to get going for the Rays. He has failed to record a hit in his nine at-bats this World Series. Zunino is a boom or bust hitter with a lot of strikeouts, but he also had four home runs in 37 at-bats in the AL playoffs.

The Dodgers might just be too much for the Rays to overcome. Urias has been rock solid throughout the playoffs, and LA’s hitters are in a groove. It will be tough or Yarbrough to get the win.