What on Earth could the Los Angeles Dodgers and the Tampa Bay Rays possibly do for an encore?

Game 4 had it all. There were lead changes, clutch hits, incredible plays, and the most memorable game-winning hit in a World Series since Luis Gonzalez clinched the 2001 World Series for the Arizona Diamondbacks.

This series is now tied at two apiece, ensuring that we will see a Game 6 on Tuesday no matter who wins Game 5 on Sunday night. 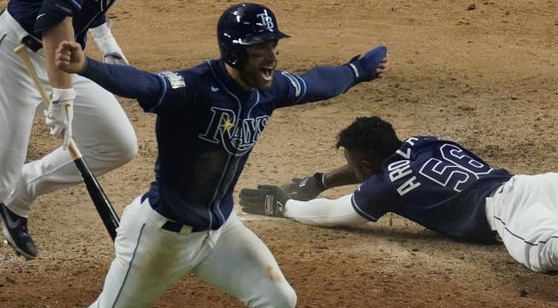 The Tampa Bay Rays have scored 14 combined runs in their two wins in the World Series but just five in the two setbacks.

The Dodgers lost even though they were incredibly clutch at the plate throughout the night. All seven of their runs came with two outs, but they were never able to pull away like they did in Game 1 and Game 3. There were eight straight half-innings with at least one run, the longest streak in the history of a World Series game, but Tampa Bay came out on top thanks to the lightly used Brett Phillips.

In Phillips’ first at-bat since Game 3 of the ALDS back on October 7, he came up big. With two out and two on, he hit a bloop into center field that scored Kevin Kiermaier and Randy Arozarena to win the game for the Rays.

It wasn’t pretty to see Arozarena score though, as Chris Taylor mishandled the ball in center field, and then catcher Will Smith let the ball get away from him to allow the game-winning run.

Total bettors riding the 'over' are 4-0 in the World Series and the other trend that remains constant is backing the favorite on the run-line or taking the underdog straight up. Our 2020 Playoffs Betting Results allow you to track all the game logs.

This is a tough spot for Clayton Kershaw.

If the Dodgers would have won Game 4, he would have had a chance to close out the World Series in Game 5 and erase all his prior playoff failings in one fell swoop. However, the pressure is now on one of the greatest pitchers of the 21st Century, and the Dodgers need him to come through.

Kershaw was lights out in Game 1. He befuddled Tampa Bay through six innings, allowing just three baserunners and one earned run while striking out eight in an 8-3 win. Kershaw has had a lot of issues in the playoffs though, and many will expect those problems to rear their head once more. He is just 12-12 with a 4.22 ERA and a HR/9 rate twice as high as in the regular season.

Tyler Glasnow’s first World Series start went swimmingly through the first three innings. He allowed one base runner in each inning, but he struck out five and was largely cruising. Then, the fourth and fifth innings happened. Glasnow lost command of his pitches, and he allowed six runs before getting pulled after recording just one out in the fifth inning.

He can take a little bit of solace in the fact that he only surrendered three hits, and he largely shot himself in the foot with six walks.

Although Glasnow has been one of the Rays’ best pitchers over the last few years, he hasn’t been the same in the postseason. In seven playoff starts, Glasnow is 2-4 with a 6.46 ERA and a 1.50 WHIP.

L.A. manager Dave Roberts will have to answer questions as to why he continues to trust Kenley Jansen in the closer role after Game 4, and we might not see the long-time Dodgers reliever in a save situation again this series.

Jansen won’t take part in Game 5 after throwing 21 pitches last night, and Pedro Baez will also be unavailable after 1.2 innings of work.

Blake Treinen and Brusdar Graterol are unlikely to see action after pitching in Game 3 and Game 4, so Kershaw will be asked to stay on the mound as long as possible.

The Rays’ bullpen is stretched even more thin after Kevin Cash used his best three relievers on Saturday night.

Diego Castillo and Nick Anderson won’t factor in Game 5 after throwing 20+ pitches, but we could see Pete Fairbanks since he only threw 12 pitches.

Ryan Thompson and John Curtiss will be unavailable after pitching the last two games, so we could see a lot of long reliever Josh Fleming if Glasnow doesn’t make it late into the game. Fleming threw 2.2 innings for the Rays in Game 1.

Corey Seager claimed the NLCS MVP last week, and he is likely the favorite to win the World Series MVP if the Dodgers end up winning it all.

Seager was unstoppable in Game 4, going 4-5 from the plate with a home run and two RBI, and he has now reached base 11 times through four games in this series. His bat is a big part of why the Dodgers have 25 runs against a very good Rays’ staff.

Justin Turner became the first player in World Series history to hit a first-inning home run in back-to-back games on Saturday night. He has eight hits through four games after his four-hit performance in Game 4, and his bat has come alive after he struggled in the Dodgers’ first two series.

The unknown rookie has burst onto the scene this postseason, and he just set the record for total bases in the playoffs. He has now made it on base in 12 straight games and his 3-4 performance with a home run on Saturday night led to him setting the record for postseason home runs with nine.

Kevin Kiermaier failed to register a hit in Game 2 and Game 3, but he was the only other Tampa Bay player to get multiple hits in Game 4. Kiermaier is the heart and soul of this team in a lot of ways, and he looks like his old self after a fastball on the hand in the ALCS led to some diminished production at the plate.

The over has hit in all four games of this series so far, and it is the right play again in Game 5 given the state of both bullpens.