The NLDS continues with Game 2 as the Atlanta Braves stay in Wisconsin to take on the Milwaukee Brewers from American Family Field. The opening pitch is set to take place at 5:07 p.m. ET and will air on TBS from Milwaukee, Wisconsin.

There wasn’t a lot of scoring in Game 1 between the Milwaukee Brewers and Atlanta Braves on Friday. Both teams combined for just one hit through the first four innings, and there wasn’t a run scored until Rowdy Tellez hit a two-run bomb in the seventh inning. Joc Pederson countered with a solo shot in the eighth inning, but it wasn’t enough as Josh Hader shut the door to secure a 2-1 win. Another Milwaukee win in Game 2 would put Atlanta in a tough hole to overcome.

Short series are where Milwaukee shines thanks to the best trio of starters in the majors. Corbin Burnes was superb in Game 1, and Brandon Woodruff should be able to keep it going on Saturday. Woodruff posted very similar stats to Burnes in the regular season, and we saw how Burnes befuddled the Braves. 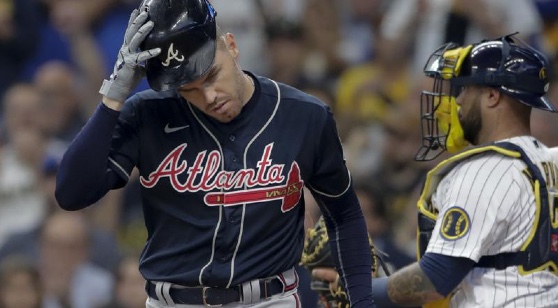 The underdog has covered the run line in four of the last five games played between the Braves and Brewers. (AP) 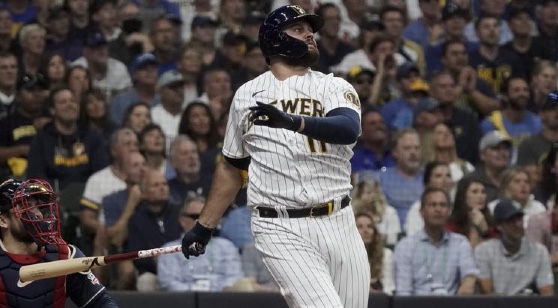 The Milwaukee Brewers have won four of their last five games when facing the Atlanta Braves. (AP)

Woodruff was very unfortunate to finish with a 9-10 record. He had very little run support from the Brewers, as he posted a 0.96 WHIP and a 2.56 ERA. Woodruff finished with the exact same WAR as Burnes and was a little better than Freddy Peralta, but his record was much worse.

His one start against Atlanta this season didn’t go well though. The Braves had eight hits and plated three runs in 5.1 innings back on July 31. Additionally, Woodruff ended the season on a low note with a 4.09 ERA in four starts in September.

Milwaukee doesn’t have more than a few reliable hitters. Avisail Garcia, Willy Adames, and Eduardo Escobar were the only Brewers that posted at least an .800 OPS in the regular season, as this team made the playoffs despite being a bottom ten offense.

Adames and Escobar each had a hit on Friday, while Garcia scored a run after Charlie Morton hit him before surrendering the home run to Tellez. The Brewers really want Christian Yelich to find his form though, as he was supposed to be the best hitter in the lineup.

Atlanta will ask Max Fried to take the mound and even the series. Fried was arguably a better pitcher than Morton during the regular season, posting a 14-7 record with a 4.7 WAR. His 1.09 WHIP and 3.04 ERA were two of the best numbers in the National League, but he isn’t going to overpower hitters with his stuff.

Austin Riley and Freddie Freeman were the best hitters for the Braves after Ronald Acuna Jr. was lost for the season. Freeman was able to get on base twice thanks to two walks in Game 1, while Riley had one of Atlanta’s four hits.

Ozzie Albies continued to struggle. Albies went 0-4 with two strikeouts and left three runners on base in the one-run loss. He was one of Atlanta’s three hitters with 30 home runs in 2021, but he has not had that much success getting on base. That hurts this offense since he is the biggest threat on the base paths.

The acquisition of Jorge Soler and Adam Duvall gave the Braves some help on offense, and they helped propel Atlanta to another AL East title. They combined to hit 30 home runs in just over 400 plate appearances, but Duvall was very hit or miss with strikeouts in almost a third of his plate appearances.

Overall, Atlanta’s bullpen was better than Milwaukee’s in the regular season, but the Braves aren’t going to score many runs on Hader, Devin Williams, and Brad Boxburger.