Non-conference NBA action will resume on Sunday afternoon with the Nets set to host the Suns during the final matchup on ESPN’s nationally televised slate.

Brooklyn heads into Sunday as a two-point favorite over the visiting Suns – marking just the fourth time since the start of March that Phoenix has been listed as an underdog (27 games).

The total for this event currently sits at OU 229.5, which is just the fifth time the over-under for a Suns’ game has been set above 226 since the start of April (13 games). 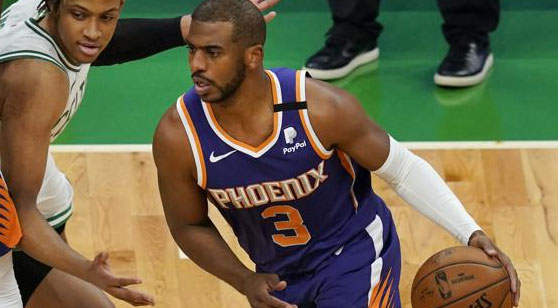 Chris Paul and the Suns continue their road trip in Brooklyn looking to avenge an earlier home loss to the Nets. (AP)

Phoenix enters Sunday’s matchup boasting wins in seven of their last 10 games, which includes impressive victories over the Sixers, Bucks, Heat, and Jazz during that timeframe.

The Suns were defeated by Boston in their most recent affair though, as Phoenix managed to put up just 86 points on 41% from the field, and 17% from long-range during the loss.

On the other hand, the Nets enter this contest after alternating wins and losses during their last eight matchups, despite being favored in half of those defeats.

Brooklyn’s most recent affair resulted in a five-point win and cover against the Celtics, as the Nets barely held off Boston’s fourth-quarter comeback effort during the absences of James Harden and Kevin Durant.

Brooklyn and Phoenix split a pair of matchups during last year’s regular season – with both of those contests being decided by a difference of 20 points or more.

The most recent meeting between these teams took place back in February of this year though – which resulted in a two-possession victory for Brooklyn, as Harden went off for 38 points on 14-of-22 from the field during the absences of Irving and Durant.

The Suns enter Sunday’s contest having won seven of their last 10 games – currently giving Phoenix the second-best record in the NBA, which falls just two games behind the league-leading Jazz.

Betting the total in Suns’ games has been a roller-coaster ride this season – with the ‘over’ cashing in roughly 52% of matchups containing Phoenix so far this year, which ranks 12th across the league in that department.

Make note though, there has been some newfound consistency in scoring-volume during Phoenix’ most recent stretch of contests – considering the total has gone 'over' in 10 of the last 14 Suns’ games.

Brooklyn has endured a variety of injury concerns over the course of this season, with the Nets’ issues heading into Sunday’s matchup still being centered around the vacancies of Durant and Harden – which has led to losses in four of the last eight games for Brooklyn.

Betting the ‘over’ in Nets’ games has been one of the most consistent plays across the league this year – with the total going 'over' at a 35-25 clip in matchups containing Brooklyn so far this season.

Make note though, that trend has fizzled out lately – considering the total has stayed 'under' in three of the last six Nets’ games.

With all the different players constantly rotating through Brooklyn’s injury report, the Nets have struggled to find a sense of continuity at the offensive end of the floor during their latest stretch of matchups – having scored less than 110 points in three of their last four games.

Per usual though, Irving’s contributions on offense have been remarkably unwavering across that window.

Kyrie heads into Sunday having assisted on eight or more baskets in five of his last six contests – with Irving’s worst outing in the distribution department during that span being the six-assist performance he posted in Brooklyn’s victory over the Hornets last Friday.

I’ll back Irving to add another solid tally to Brooklyn’s passing numbers here.

Phoenix heads into Sunday’s contest boasting victories in six of the last eight games, with the Suns’ only losses across that stretch coming in tough matchups against Boston and San Antonio.

On the other hand, Brooklyn enters this matchup following losses in four of their last eight contests – despite being favored in over half of those affairs.

I’ll take the points with Phoenix here, as the Nets have been far too difficult to trust lately with Durant and Harden’s nagging injuries.