Expectations are a funny thing in the NFL, as everyone's got big ones whether on the field or at the betting window.

Getting behind the team(s) that outperform expectations is what everyone at the betting window is looking for, and with general concepts that have consistently played out over the course of NFL seasons – about half of the teams in the playoffs turn over, about half stay the same, etc. - there ends up always being a handful of teams that become the “it” teams of the preseason.

However, in terms of how bettors can grade teams do in regards to living up to their expectations, an ATS record is a nice place to start. From there it would make sense to think that teams that finished 2020 with a better ATS record than SU record would be strong candidates to make significant improvement and if they continue to outperform the market then a good season should be in store.

But what about those teams that finished 2020 with a winning ATS record and a losing SU record? Or a winning SU record and losing ATS record? Those are two scenarios we would get every year in the NFL, would give a nice random sample size of teams to work with, and something that logistically there are arguments to.

A team with a winning SU but losing ATS record could be a squad that was either overhyped or unable to live up to lofty expectations and trying to cover lofty spreads and falling short in either case.

But at least over the last handful of years, being on that list or the one of being a team off a losing SU, but winning ATS season isn't somewhere an NFL team wants to be.

NFL teams off a Winning SU but Losing ATS season

(all stats taken from Team rankings, and ignored all 8-8 teams either SU or ATS)

Success the following season is all relative for teams in this spot since the start of 2016. That year saw Houston and Tennessee as the only two teams in the league with a winning SU but losing ATS record, as each was 9-7 SU and Houston 6-9-1 ATS and Tennessee 7-9 ATS.

The following year (2017) saw the Titans as the only one of the two to make the playoffs but at 9-7 SU there was no big leap taken. Every year since there have been three teams to fit into this role and there have been a few minor patterns to make note of.

#1: Since 2016, at least one of the teams in this group has made the playoffs the following year, but they all haven't.

Not hard to figure that these teams would be playoff-caliber teams coming off a winning season and one that likely saw postseason action as well. All three of the AFC teams from this year's list are popular picks to be division champs, but seeing all three teams in this role make the playoffs hasn't happened in at least five years.

Pair those two things together and you've got to find a team that's not going to improve on their SU record from last year but still make the playoffs this year.

Getting to 11 wins might not be enough for Tennessee or Cleveland as it is, so anything less than that and it might be hoping that a 10-win season is good enough for a Wild Card spot.

Things would probably be tougher for Cleveland in that regard given the competition within their division, but I've already outlined some positive playoff and division-winning based history with Kevin Stefanski that works in the Browns favor.

Five years is far from a long time for teams in this data set, and considering it's three teams most expect to be in the AFC Playoffs come January, it's hard to think that history suggests one of them won't even make it that far. Can bring a pause to any futures action deeper down the board (Conference, SB champion).

#2: None of the 11 teams in this list have made it past the Divisional Round the following season

So we've got five of the 11 teams since 2016 making the playoffs the following year, but not one of them has gone further than the Divisional round. It's another concept that's hard to even consider strongly getting behind at this point given it is Cleveland, Kansas City, and Tennessee on the list.

Kansas City being that fatigued past champion getting knocked out in the Divisional round or earlier this year makes plenty of sense, but the other two teams on that list are considered ones on the rise.

It's rare any ascent to the NFL mountain top follows a direct upward line though, and maybe the two teams should think about covering more point spreads first to get them out of this category.

NFL teams off a Losing SU but Winning ATS season

This is a group of teams that tends to always be a little larger than the other, as there have been 13 teams in this group since 2016. Having more members doesn't really bring more success though, as this is not particularly a group teams want to be a part of either because they can usually fall into one of two categories as well.

These teams that overproduced against the spread but still ended up with losing records are either teams that are likely still a year away from being considered a competitor – say the Panthers, Bengals, or Giants this season – or one that blew too many chances in what should have been a far better year (2020 L.A. Chargers) and another decline might be in store. 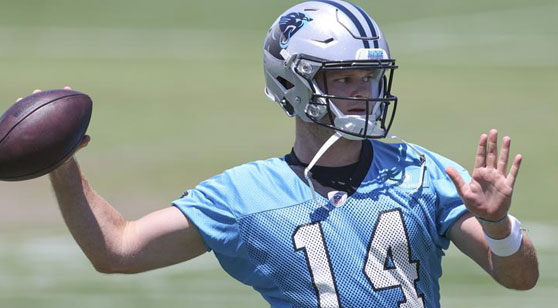 Sam Darnold enters his first season with the Panthers looking to take Carolina above the .500 mark in 2021. (AP)

But at least in the last two seasons, all these teams at least share something in common:

Chicago was the only one of four teams from this group to make the postseason in 2018, and since then, five failed to make the playoffs in 2019, and the three from last year (Arizona, Denver, Miami) all missed out on playoff football as well.

The 2017 New Orleans Saints were the only other team to make the playoffs in the entire data sat, and again, neither they or the 2018 Bears got further than the Divisional round. So on the off-chance one of these two teams does break the mold, capping positive futures outlooks at season win totals, playoff yes/no, or division odds is the best way to do things.

This goes hand in hand with the playoffs likely being something the seven teams in this year's list aren't a part of, as you aren't going to make the playoffs in today's NFL with an 8-8 SU record.

It does speak to the idea that a lot of these teams that do finish a season with a losing SU record and winning ATS record are ones coming off an awful season, got their high draft choice through Year 1 and is likely building a new culture with new coaches, etc. around.

Teams like that are going to tend to be undervalued to begin with, but the cat's out of the bag in Year 2 and building from the ground up does take some time in this league. There is more film on that now 2nd year QB (Cincinnati), and 2nd year coaches (Carolina, N.Y. Giants) have had their patterns and play calls studied for months.

Put a little market sentiment on top of all that with the basis for any early season play on these teams being based partly in them outperforming the market a season ago and if you take a step back for a second, a natural decline in these teams does make some sense.

At the end of the day they still found ways to lose more often than they won, and if those habits continue to creep into the every day culture of an organization, bad things tend to happen. We've seen it with the Chargers for a few seasons now with a wide variety of blunders to cost them games, and that's with everything else generally going pretty well for them in those seasons.

What if things go awful for the Chargers out of the gate again this year, be it poor play, injuries, or anything else, and then end up not even sniffing a playoff spot this year.

Would it really be that hard to make a case for saying those other six teams on this year's list aren't likely to make the playoffs either? I think that's a very realistic outcome for all of those teams as nearly all of them can easily be cast as teams that are likely still a year (or maybe a piece) away from being highly competitive.

Using that idea narrows down the NFC East to a choice between Philadelphia and Dallas and that's not a far-fetched debate to have to begin with.

Either way, last year's ATS success as a sub-par team doesn't equal outright or even ATS success the following year, and any considerations on any of those seven teams to step up and take the next step might be best held off on until a few weeks of action are under the belt.