One of the only other awards with a betting market we haven't taken a look at historically is the NFL's Offensive Player of the Year award. Often times it can be considered an attachment to the MVP trophy as a lot of fomer league MVP winners took home this award as well, but it has been tougher to rely on lately.

It's an award that does have some historical trends with it though, at least in terms of helping one try to narrow down the selections in the field.

Apologies to the co-chalk, reigning winner of this award in Derrick Henry (+700), but this is just not an award that many winners have ever won in consecutive seasons. Marshall Faulk was the last to do it (1999-2001), with RB Earl Campbell (1978-1980) the only other guy to accomplish the feat.

So when the only guys to win this award in consecutive years actually went on to win it in three straight, Henry supporters may have to hope 2021 is Year 2 for him in that trend. Not something I'm interested in supporting as one of the favorites for this award, especially when the RB position itself has a hard time repeating for this award.

The last time we had two straight years of RB's winning this award was 2005-06 (Shaun Alexander, LaDainian Tomlinson), and there have been four other RB's to win this award since then. Every time the following season the OPOY winner turned out to be a QB.

And the news isn't all bad here for RB's, as if you are looking to back that position for the MVP, you might as well double up on taking them for OPOY too. All three RB MVP's since 2002 won this award that same season too (Shaun Alexander (2005), LaDainian Tomlinson (2006), Adrian Peterson (2012).

Six other RB's have won the OPOY since 2002 as well, so even though this might not be the year to go heavy on RB's for this award (rare for RB's to repeat as winners), any RB thoughts for MVP probably have a better success rate in this Awards market. Any past RB MVP winner has won this award every time, and six of the other 16 years have seen RB's win OPOY but not the MVP.

Which lead to my second thought when discovering this trend – my first obviously being don't be afraid to double up on MVP/OPOY markets – in that price shopping between the two markets – MVP and OPOY – is going to bring some interesting decisions.

It's very hard for NFL MVP's to repeat as winners, but Aaron Rodgers for MVP is +1000 while his OPOY price is +1200. The OPOY market accounts for RB's much more (and other positions) because of the poor history other positions aside from QB have in winning MVP's – Henry is +700 for OPOY but +5000 for MVP – but depending on who a bettor may be liking for one award, there are some interesting questions that pop up.

One thing is for sure, any non-QB selections are likely to find a much better success rate in the OPOY market rather than the MVP market, especially when you know any win in the latter has always brought an OPOY win with it in recent years.

In fact, you can go all the way back through the connection between RB's that win MVP and their OPOY success and see that's generally how it's been throughout the history of the award. The NFL OPOY award was introduced in 1972, and of the 13 RB's that have won the NFL MVP award in that time, 12 of them won the OPOY that same season.

The only one who didn't was Dallas RB Emmitt Smith in his 1993 MVP season as WR Jerry Rice won his 2nd career OPOY. Smith never won this award in his HOF career.

Oh, and about the specifics with Rodgers for OPOY as the reigning MVP? Only one reigning MVP went on to win the OPOY the following year since 2002 – Peyton Manning MVP in 2003 – OPOY in 2004 – but that 2003 season was also only the 2nd time ever the league named two MVP's (Manning and Steve McNair).

The only other guys to win OPOY after winning MVP the year before were Campbell (1979-80) and Faulk (2000-01), so that uphill climb against history Henry has as one of the favorites for OPOY this year basically applies to Rodgers as well (+1200). It's just not something we see a whole lot of in today's age and as the guy with the 4th best price on the board, Rodgers is a likely pass for OPOY as well.

#3: No OPOY winner since 2002 has come from a team that played in the Super Bowl the previous season

This was a wild one to find, as I figured that between the four times that Manning and Tom Brady have combined to win this award in that span, and the two of them combining to play in 12 Super Bowls prior to last year, something there would match up. But Brady's two OPOY wins came in 2007 – New England's perfect regular season – and 2010, the year after Manning's Colts lost to New Orleans in the Super Bowl.

So scratch any Kansas City or Tampa Bay players off the OPOY list, which means the other chalk play of Mahomes (+700) is gone from consideration as well. Brady and Travis Kelce (+1800) would be the next qualifying names there, with Tyreek Hill (+2200) trailing just behind.

Eliminating the players from teams who played in last year's Super Bowl is where it begins and ends with this award in terms of looking at the teams potential candidates play for, and like the MVP, you want a guy coming off a year in the playoffs.

It seems this award has a lot to do with guys who are able to get that good team up to the next level off the back of a great season. An award that's only seen one of those 19 winners be a WR (Michael Thomas in 2019) and the other 18 being either a QB or RB, touches and just more opportunity to make plays for a winning team is what ultimately gets noticed.

Adding on top of the idea that it's rare for RB's to repeat as a position for this award, a heavy lean to playoff teams and their QB's gives you a pool of 12 to isolate. QB Matthew Stafford (+2200) may already have a leg up in the narrative department for this award, because he's the new piece to an existing playoff team that would get plenty of credit if he helps the Rams have a strong season overall.

However, you'd better not believe the Rams are going all the way in that instance then, as no OPOY winner has won the Super Bowl in the same season since Faulk did in 1999, and even going back to it's outset in 1972 the success rate for winners of this award and SB titles is extremely low (Roger Craig 1988, Joe Montana 1989, Terrell Davis 1998). 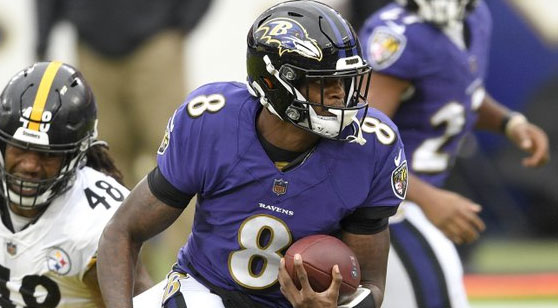 Lamar Jackson looks to bounce back from an off season as the Ravens' quarterback is 18/1 to win the OPOY honor. (AP)

So it's a guy on a playoff team from a year ago, that could still take the next step but not win the Super Bowl, and one that has a decent chance of being the league MVP as well.

Those same names from the MVP piece – Josh Allen (+1500), Russell Wilson (+2000), and Baker Mayfield (+5000) – are going to be ones the come up regardless, as they are three names where the price is much better for all of them in OPOY than it is in the MVP market.

Stafford (+2200) makes a lot of sense with the Rams expectations and season projections, but I still think he'd need a tremendous year to be considered the reason behind any next step the Rams take in 2021. This is still a team that's got a guy who has won the DPOY in three of the four previous seasons (Aaron Donald) and is the favorite to do so again this season. They made the Super Bowl with their previous QB back in 2018, so what exactly can Stafford bring in order to improve on that enough to make him a top contender for this award. I'm not sure.

Lamar Jackson (+1800) checks all the boxes as a potential candidate here, as he's a QB off a 2020 playoff team and one that's still built to find some level of playoff success. With Jackson's running ability, if we see a huge improvement in his passing this year and the Ravens offense just explodes on everyone, this former league MVP would likely be just fine being in the MVP talks all year long and settling with this award in the end.

The potential for team success and significant individual improvement is there in spades for Jackson in Baltimore this year, and if they meet positively for him this year, Jackson's first career OPOY award may be more likely than his 2nd MVP.