Took some of the same thinking from the OPOY history and applied it to the other side of the ball and sadly the field separation just isn't the same. It does seem like an award that's going to get harder and harder for a certain defensive position to win with such emphasis on the passing game these days, and that can help eliminate some names too.

But this is also the award that's the defacto MVP for defensive players with it basically impossible to win the actual MVP award. Using that idea as another war to narrow the field doesn't hurt either, although if you're the favorite Aaron Donald (+500), being so dominant for so long does you no favors as the favorite this year.

#1: No player has ever won this award more than 3 times in their career

Easiest to start here given that three-time winner Donald is chalk at +500 to win this award for the fourth time in five years. Considering no player has ever won it more than three times in some sort of “greatness fatigue” from voters, but to lay chalk on something that's never happened just isn't something I'm all that interested in.

Can't forget about eliminating J.J. Watt (+2000) on the basis of this history as well. He's another guy that won three in four years (2012-15), and is hoping to be one of those pieces to take the Arizona Cardinals that next step.

#2: 13 of the last 14 winners were on a team that made the playoffs that season

Not hard to find the logic behind the success of this trend, as the best defensive player is going to be playing on a defense that's probably good enough to win enough games to make the playoffs in some capacity.

It's a piece of history that still casts a wide enough net to keep many of the top names on the board in play, but any longer shots better be taken with the idea that you believe that player players for a team that will be in the playoffs this year.

#3: Only two of last 19 winners came off a team that was defending SB champion – both of them were DB's

Considering Tampa Bay as a playoff team again this year is the consensus by everyone, their role of being the defending champs has only netted two previous winners of this award since 2002.

Bob Sanders did it in 2007 with the defending champion Indianapolis Colts, and Stephon Gilmore did it with New England in 2019. You'll note that neither of those teams went on to repeat as champions that following season, so if you like Tampa to repeat this year, passing on any of their players – Devin White +1800, Shaquil Barrett +3500 – for this award may be the way to go.

The top two guys they've got are both linebackers anyways, and it's only ever been those two DB's. In fact, staying away from linebackers on any team might be best because...

Linebackers used to clean up with this award for years in the NFL, rarely going more than a couple of years before one player from the position took this award home.

But you've got to figure with how the NFL has shifted to a pass heavy league in recent years where the ratio is so skewed to the air game that linebackers winning this award may be just a fact from yesteryear. You've got to be able to either stop the ball before it gets in the air (pass rushers with sacks etc), or stop the ball as it's coming out of the air (DB's) to really be considered a defensive weapon and thus the best defensive player in today's game.

That's just not a spot you see too many linebackers excel in, let alone get enough opportunities throughout the season to dominate in those roles to win a season-long award.

With a much higher variance where these winners come from, eliminating a chunk of the field is much tougher for the DPOY. I do believe that “greatness fatigue” is real enough to keep Donald and Watt from winning this award, because in that scenario you'll also get the inevitable “is Donald/Watt better than Lawrence Taylor (only other guy to win this award three times)” conversation and right or not, that idea will be something some voters could get hung up on.

Now Donald could continue to be the game-wrecker that he is and play up to showing why he deserves to be the favorite, but there are enough young, hungry pass rushers right behind him that could simply have the benefit of being “new” in any comparison with Donald if the numbers are similar.

Washington's chances of making the playoffs again do take a hit with a first place schedule when a sub-.500 division winner like Washington probably isn't ready for it.

If that goes poorly, Chase Young's (+850) chances at this award are tough with Washington as a non-playoff football team. Never mind the fact that before Watt (2012) and Kuechly (2013) were the last two players to win this award in Year 2 of their careers, the last player to do so was Taylor in 1982; a year after he won the DPOY as a rookie in 1981.

Unless Washington goes berserk with a 14-3 SU record or something like that with the 1st place schedule they've got to deal with, Young is going to be another name that might be best to pass on.

A bunch of the other pass rushers at the top have concerns about the idea that their teams will be playoff bound in 2021 too, as questions about Pittsburgh (T.J. Watt +800), L.A. Chargers (Joey Bosa +1000), Chicago Bears (Khalil Mack +1600), and San Francisco 49ers (Nick Bosa) making the playoffs have to be asked.

I do also believe that going forward this will be an award dominated by pass rushers (DL) and pass stoppers (DB's) with how the game is offensively, so eliminating all of those names might be a vague idea to abandon a few weeks into the year if one of those guys goes off.

But it also means that LB's being a thing of a the past for this award is something I do think could be real going forward for this league, and limiting any future DPOY selections is likely going to bypass LB's entirely.

No winner of this award has gone on to win the Super Bowl in the same year since James Harrison did it with Pittsburgh in 2008, so the idea of finding a guy on a playoff team that's going to slip up somewhere in January is something I also kept in mind. 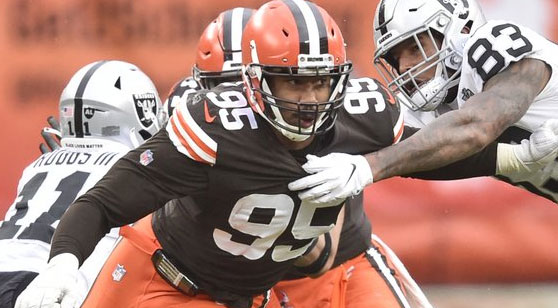 Co-favorite Myles Garrett (+500) makes a lot of sense for every argument if he is his productive self for a full 17 games, with Cleveland being one of those teams that it's easy to expect to make the playoffs in 2021, but hard to commit to the Browns making a championship run.

Nick Bosa (+1600) would be that earlier name I'd bring back from that earlier list of teams with potential playoff questions. I'm not convinced San Francisco is going to be as good as most numbers or people think, but should they blow me away with a great season, it's going to have to be led in some manner by Bosa on defense.

Those are the only two names I can commit to heading into the year, as it's a race that's likely to be tight throughout the entire season, especially if greatness fatigue on Donald starts to show up. In that scenario this award is completely up for grabs, and making a decision on candidates after some games have been played is a better way to approach that potential outcome.