The NFL preseason was shortened to three games for each team this year, and as much of a positive the move was for players and the league, it does create some uncertainty into weighing past Week 1 trends based off preseason results.

Granted, just saying that is going to be a big stretch for some given the different motivations and roster constructions every NFL team has for each preseason game, but at least in terms of Week 1 results the past seven years, the old saying “winning begets winning” does have some value, as does the opposite part of that equation.

Every preseason in the past we've always ended up with about a handful of NFL teams that either make their way through August winless, or undefeated. Again, different motivations play into those results for teams based on who even suited up for them, but starters sitting every game happens every year and therefore is already incorporated into these past results as well.

So bettors have to decide for themselves how they want to approach this information, but going undefeated in the preseason tends to bring positive results for those squads in Week 1.

Only having three preseason games this season is going to grow the lists of undefeated and winless preseason teams this year, but going back to 2013, teams that go undefeated in the preseason are 12-6 SU and 12-5-1 ATS overall. That stretch also includes a 8-10 O/U record in those games as well.

That does still leave a few teams like Buffalo, Baltimore, N.Y. Jets, Indianapolis, and Denver as sides one should consider backing on the point spread in Week 1, but let's see if we can't narrow this list down a little further.

During that 18-game stretch since 2013, undefeated preseason teams that were favored by -4 or more in Week 1 have gone 4-1 ATS, and 3-0 ATS when the point spread is -5.5 or greater. There is also the fact that all four times we've had a Week 1 road favorite of any number go undefeated in the preseason, the Week 1 results for those road favorites are 4-0 SU and ATS since 2013.

One team from this year's list – Buffalo Bills – fits the role of being a Week 1 favorite of -4 or more (Buffalo is -6.5 currently at home vs Pittsburgh), and the fact that the point spread is above that -5.5 number puts Buffalo in that perfect 3-0 ATS subset as well.

The Denver Broncos are the other interesting Week 1 case here, as they begin the year as slight road favorites in a non-conference tilt with the Giants. Because of that spread, the Broncos find themselves in that perfect 4-0 SU and ATS role for Week 1 road favs off an undefeated preseason.

Denver made the decision to go with QB Teddy Bridgewater from the outset this year – likely because he's great at protecting the ball as Denver was dead last in turnover margin last season.

Bridgewater has also earned quite the reputation in the sports betting world as simply being a guy who covers point spreads regardless of the role, spread, or situation. Given that those categories seem to line up favorably for Denver in Week 1 this year, I'm interested to see how much support the Broncos get against the number as Week 1 approaches.

Only 11 of those 18 teams that have gone unbeaten in the preseason since 2013 opened up Week 1 as favorites, meaning those seven past underdogs introduce some potential nice Week 1 roles for just one team this year – the New York Jets.

Backing the Jets in Week 1 can be tough to get behind already given that they'll be sending a rookie HC and rookie starting QB on the road for their first game this year and neither of those roles are easy to get behind.

Yet, those seven previous Week 1 underdogs that had not been beaten in August have gone 4-3 ATS overall in Week 1, breaking down to a 3-3 ATS record as a road dog, and a 1-0 ATS record as a home dog.

A 50% success rate for road dogs in this same role the Jets are in is far from great, but when you consider that the 4-3 ATS record overall is directly correlated to SU results as well (all four underdogs that covered ATS won the game outright), Jets fans/backers that are optimistic about their Week 1 chances in Carolina might want to bypass the points entirely.

But it's still a Week 1 road game with a rookie HC and QB starting against a team that the Jets just traded their previous QB too – Sam Darnold. Calling this game a “Sam Darnold revenge game” might be a little much given it's his first regular season game in new colors.

However, an undefeated preseason has brought more of a winning mentality in that New York locker room already, and should they find a way to get by their old QB and start 2021 out with a 1-0 SU record, maybe we can point back to their undefeated preseason as the first bricks in the foundation HC Robert Saleh is trying to build there. 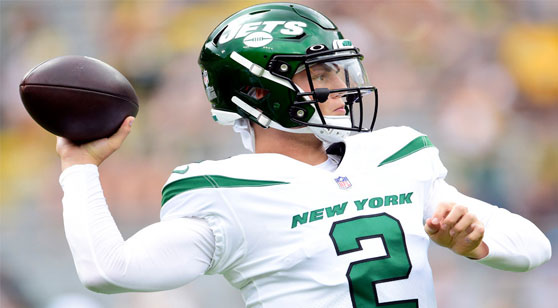 Rookie Zach Wilson looks to lead the Jets past the Panthers in Week 1 as a road underdog. (AP)

Oddly enough, all the undefeated preseason teams this year come from the AFC, and all the winless teams come from the NFC. Overall it was an ugly preseason for the NFC on the whole, as three of the four teams in each of the NFC East and NFC North didn't even win a single game.

The combined 0-18-1 SU record for Philadelphia, N.Y. Giants, Dallas, Minnesota, Detroit, and Green Bay is completely futile no matter how many starters those teams decided to play in August, as the winless Atlanta Falcons and L.A. Rams are also a part of that group this year.

Considering that winless preseason teams since 2013 are just 3-12 SU in their Week 1 games (3-11-1 ATS), we've seemingly got a scenario here where “losing begets losing” at least in Week 1.

A poor preseason is what many bettors remember last, and often times it's not always who's in street clothes in the preseason that really makes a different. You can get some bad teams in these lists that need help in multiple positions on the football field after a down year, and whether it's new regime, not enough talent, or no starters playing, these winless teams tend to need time to find their footing.

Only three of those 15 past instances have seen the winless preseason team as a Week 1 favorite, with two instances of the line closing at pick'em as well. Meaning that only 5 of the 15 games have seen these winless teams laying chalk (or pickem) in Week 1, a role that has resulted in a 1-4 SU and 0-5 ATS record for those squads in Week 1. Home favorites have gone 0-2 SU and ATS as well.

This year we've got a bunch of these winless teams laying chalk in Week 1, as Minnesota (-3.5 @ Cincinnati), Atlanta (-3.5 vs Philadelphia (another winless team), Green Bay (-3 at New Orleans), and the L.A. Rams (-7 vs Chicago) all find themselves in that awful role and might be worth a fade on this history alone.

Catching points is the more expected scenario for these franchises that did not look good in August, but the 3-6-1 ATS record doesn't particularly suggest that taking points with these teams is much of a good idea either.

But two of those three ATS wins were also outright victories as well, with both of those instances seeing underdog point spreads of 3.5 or lower. That's a range that the Philadelphia Eagles land in for Week 1 in the game between two winless teams, as are the Giants as +2.5 home dogs, but there is more to touch on with that Giants game.

Detroit is the third team from this list as week 1 underdogs as they are currently +7.5 home dogs vs. San Francisco. The only other time we've had a winless preseason team catching more than a touchdown (more than 4 points actually) was the 2014 Indianapolis Colts who opened the season as 8-point road underdogs to Peyton Manning's Denver Broncos (fresh off a blowout SB loss).

Denver went on to win that game 31-24, as the Colts won the 2nd half 17-7 to sneak in the backdoor. Something the Lions could very well do in a few days too.

Philly made the decision at the end of last year to go forward with Jalen Hurts under center, but trading for QB Gardner Minshew a few days ago really calls into question how much the new coaching regime really prefers Hurts.

Head coach Doug Pederson left town because of philosophical differences with management as to the direction of the Eagles, and here we are three preseason games later and Philly's management goes out and makes a trade like this.

Odd to say the least, and even with the Eagles falling into this decent range and going up against an Atlanta team that's in an awful role as a winless preseason team (HF's are 0-2 SU and ATS), I can understand why it would be hard to pull the trigger on taking the points with the Eagles in Week 1.

The first time was when we had the undefeated 2016 Philadelphia Eagles open the year as -4 home chalk against the winless 2016 Cleveland Browns. That game ended 29-10 in favor of the Eagles, which would also suggest a play on Denver in Week 1.

So we will see what happens in two weeks, as this information is out there, whether bettors want to live by it or spit on it, it's always your choice.