Hot and Not Report - Week 1

After spending the past few weeks outlining some various situations and angles that NFL teams find themselves in Week 1 this year, it doesn't hurt to add more support to some of those ideas by harking back to something I brought up last year at this time and worked rather well through the eight games it applied too in the opening week last year.

So lets touch on sides and totals for a handful of Week 1 games, with the main criteria being games that include playoff teams from a year ago.

Over the past four years, playoff teams from the previous year are 24-6-1 SU (18-13 ATS) in Week 1 when playing a non-playoff team from a year ago.

Outlined this scenario last year when it was on a 18-4-1 SU run over the previous three years and we had eight different games fit the scenario. Baltimore, New England, Buffalo, Tennessee, Philadelphia, San Francisco, New Orleans, and Seattle were all 2019 playoff participants that opened up the 2020 campaign against a non-playoff team, and on the whole they went 6-2 SU and 5-3 ATS (grading the Titans two-point win as an ATS loss after opening at -1 and closing -3).

Similar to last week's idea that “winning begets winning” in this league with undefeated preseason teams starting out the regular season on the right foot, teams that were among the top third in the league last year seem to find a way to keep the good times rolling early on the following season when they are up against a team looking to take that next step and get to a similar level in becoming a playoff-caliber team.

We don't have a list of eight contests to roll with this year despite having an extra two teams from last year's expanded playoff format, as the Week 1 schedule does pit many of those postseason squads against one another this year. But there are four contests that fit the bill this year, and one of them even includes an undefeated preseason team to tie in last week's piece yet again.

The Baltimore Ravens are the one team from this year's list that also have that positive role of being an undefeated preseason team going for them, although a two-year wait for a new stadium to be debuted with fans is still a rather unquantifiable scenario that can still bring some questions about how seriously one really wants to trust the Ravens as the only road team as well in this list.

This week's scenario does suggest that a Baltimore ML wager is probably the ideal way to support this trend as opposed to laying the 4.5 points. Even with the unknown of whether or not the Raiders home field advantage could be considered slightly higher than the average NFL team, there is just too much support historically that suggests Baltimore starts the year 1-0 SU. That's where I've ultimately landed on this game too. Washington is another interesting case here, as they are the only underdog of the group, and also the only ones who get to face a rookie HC making his NFL debut, on the road no less.

The first game on the road for rookie HC's sits at 32-51 SU but 49-32-2 ATS as I outlined in that earlier piece, which throws a nice wrench into this game completely given that it's a 1-point spread currently, and it's actually the team with the rookie HC (LAC) that's laying the chalk. Previous debuting coaches have not had much success winning games outright with that 32-51 SU record, but an ATS record that's 17 games over .500 in that same span does douse some of the enthusiasm for making a Washington play here.

But combining a 24-6-1 SU record for Washington as a playoff vs non-playoff team with the 32-51 SU record for rookie HC's playing their first game on the road should probably take precedent here if bettors are so inclined to make this Washington/LA Chargers game a part of their Week 1 card.

Finally, the Tampa Bay/Dallas season opener on Thursday night feels like the ideal scenario where this entire “Hot” trend plays out like it generally has in the past, with the Buccaneers starting out the season 1-0 SU with the ATS result being much more up in the air. That could easily be a nasty hook for Tampa Bay ATS backers with the spread just over a full TD, as a 1-7 point win for Tampa on Thursday is what I'm rather expecting to see there. 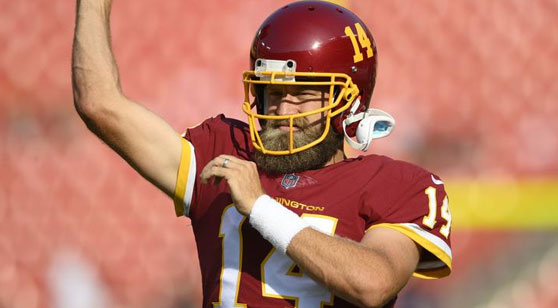 Veteran Ryan Fitzpatrick leads Washington as a short underdog against the L.A. Chargers in Week 1. (AP)

This was a run that was 1-8 O/U entering the first week of the 2020 season, and of the five games that applied (2019 playoff teams Houston and KC played in Week 1 so the result is counted only once), we still saw an overall 2-3 O/U record be the end result. Houston and KC managed to go 'over' the closing number of 53.5 by the hook, while Buffalo was the other team to cash an 'over' ticket, but did so in a 27-17 win over the Jets with a sub-40 closing total (39). The other three 2019 AFC playoff teams – Baltimore, New England, and Tennessee – all had the 'unders' cash relatively easily.

2021 has that 7 th AFC playoff team to account for, but this situation is still only applicable to five Week 1 games:

Only having five games apply means that two of them – Pittsburgh/Buffalo and Cleveland/KC – have both sides coming off playoff years and it will be interesting to see how those play out. The Chiefs were in an identical spot last season when they opened up against Houston and the 54 points in the final score only cashed 'over' tickets based on if you had bet that game sometime during the day of the game in all likelihood. Originally that total opened up at 56.5 earlier in the summer and had seen constant support for the 'under' as it kept creeping down to it's eventual closing number of 53.5.

This year the Chiefs get another playoff rematch when they host the Browns, and market sentiment has already shown support for the 'over' and once the majority of recreational bettors get involved closer to kick- off, I'm sure oddsmakers are going to hope that this 'under' run for this scenario continues in a big way. The same can probably be said for the Steelers/Bills game as well.

The other interesting case here that could see an 'under' play fit the contrarian approach is in that Ravens/Raiders game on MNF to close out Week 1.

A single primetime game to close out the opening week is almost always going to bring plenty of support for an 'over' play, and based on how Week 1 has gone for the books/bettors up until that point, we will get plenty of reports on how one-sided action will be on the side and/or total for this game.

Given the two teams on the field, an argument for an 'over' play makes plenty of sense too, but with the total already in the 50's, and the assumption being that oddsmakers are going to likely need an 'under' to cash in Las Vegas, I believe it's probably the best game of the five-game bunch to blindly trust this history.

Baltimore's still going to be a heavy run team (bleeds the clock), and considering the consensus opinion in the markets on QB Derek Carr not exactly being in the top half (or so) of the QB's in the league, it's not like an 'under' argument doesn't make sense either.