The betting impact of the Raiders being the home team hasn’t been really felt one way or another at Las Vegas sportsbooks until this week. It’s NFL Week 3 action with several intriguing match-ups, but the top story is that Las Vegans have Raiders fever.

Station Casinos has 18 sportsbooks across Las Vegas in strategic pockets on the outskirts of town in neighborhoods. They are the locals king, they get massive parlay action each week. I asked Sportsbook VP Jason McCormick what his top public parlay side was and he said Raiders, Raiders, and Raiders emphatically.

The Raiders have started 2-0 with impressive wins at home on Monday night against the Ravens in Week 1. Then, going into Pittsburgh and winning there highlighted by a bomb tossed to Henry Ruggs III that had to make Al Davis smile somewhere.

They have the fever in the same way they had it when the Vegas Golden Knights hockey team burst onto the scene and they went all the way to the Stanley Cup Finals. That was an expansion team and everyone in Las Vegas rallied behind the team whether fans of other teams or not.

I didn’t expect the Raiders to garner the same type of love from the locals because most of the Vegas transients have allegiance to their own teams, and for some western fans who root for the Broncos, Chiefs, or Chargers, they hate the Raiders. 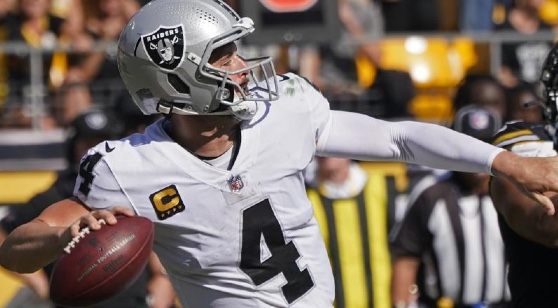 The Las Vegas Raiders are 2-0 ATS this season but now host the Miami Dolphins as favorties for the first time in 2021. (AP)

But the Raiders are 2-0 and Las Vegas fans have the fever. Underdog outright winners the last two weeks and they get the Dolphins at home this week and will be playing with backup QB Jacoby Brissett.

The Dolphins come off a 35-0 loss at Buffalo, and all the bettors saw it. It’s fresh in their minds. Raiders are playing well with the No. 1 offense, the Dolphins are struggling with the 31st ranked offense. Boom, just like that the Raiders are the first leg of almost every local bettors’ parlay.

The Las Vegas SuperBook got as high as -4.5 after opening -4 on Sunday night but sharp money has taken the Dolphins and pushed it down to -3.5. Last week, the SuperBook posted the game pick ‘em in the loo ahead numbers and was bet up to -1.

Sharp Dolphins money also found its way to Station Casinos books but they remain at Raiders -4.

McCormick said after the Raiders, the public has also focused on the Cardinals (-7.5 at Jacksonville), Bills (-7.5 vs. Washington), and then the Packers (+3 at San Francisco) and Buccaneers (-2 at Rams).

SuperBook VP Jay Kornegay says their top general public play is the Chiefs (-7 vs. Chargers), Broncos (-10.5 vs. Jets), Packers and Buccaneers. Over at the South Point sportsbook, a locals favorite, director Chris Andrews says Raiders are tops followed by the Chiefs and Bills.

Arizona takes its No. 2 offense to Jacksonville against the winless Jaguars and rookie QB Trevor Lawrence who has completed 50% of his passes with 4 TDs and 5 picks. The SuperBook went from -7 to -7.5 and finally to -8 on Friday. They have 76% tickets written on the game taking the Cardinals.

The Bills are a public favorite every week, but there are sharp minds out there making a case for the Washingtons. The SuperBook opened Bills as 9.5-point home favorites and they just moved to -7 on Friday. Station Casinos reported sharp action on Washington. Circa Sports had one of the few -7.5s remaining on Friday.

The Packers bounced back with an impressive Monday night win against the Lions so they’re back in the good graces of the public again. The 49ers have dropped from a 4-point home favorite down to -3 -120 at the SuperBook. Because it’s the Sunday night game, the Packers parlay risk is going to be so large after they post Sunday’s first 13 games that bettors liking the 49ers may get a chance to lay -2.5. Wait on the 49ers if you like them, bet the Packers now if you like them.

The Buccaneers are at the Rams and public support has flipped the favorite from the Rams -2.5 to Bucs -1. It’s an NFC power clash with the Bucs riding a 10 game win streak against the new look Rams with QB Matt Stafford and arguably the best defense in the NFL.

Denver’s defense looks amazing so far, as does new QB Teddy Bridgewater, but they certainly got a break in the early schedule. Starting the first two games on the road is tough, but the Broncos first two games were at the Giants and at Jacksonville. Now they get the Jets in the home opener. The SuperBook opened -11 and they’re now -10.5. The Broncos face a rookie QB (Zach Wilson) for the second week in a row.

Sharp action at the South Point has the Saints (+3 at New England), Chiefs, and Bengals (+3 at Pittsburgh).

What do we make of the Steelers? No points in the first half at Buffalo in Week 1, then they score 23 in the second-half to win. Then they lose at home to the Raiders in a lifeless performance with pass rusher T.J. Watt leaving the game early (groin) and he’s questionable this week. The Bengals struggled in a loss at Chicago last week. The SuperBook has gone from Steelers -4 down to -3. The Bengals are 1-4 ATS in their last five at Pittsburgh.

The Saints were one of the more popular bets last week after they trampled the Packers in Week, but the Panthers beat them up pretty good in Week 2 with a 26-7 win. The Patriots have gone from -2.5 to -3. Sharps are on the Saints to bounce back.

The SuperBook has sharp play on the Cardinals, Bears, and Cowboys.

The Cowboys have dropped from 4-point favorites to -3.5 against the Eagles on Monday night, but sharp money is on them. Stations reported sharp money on the Eagles. The Cowboys look really good and have shown two different offensive looks with the run game coming alive last week at the Chargers.

The Bears will start rookie QB Justin Fields at Cleveland where plenty of Buckeyes fans will be cheering him but that Browns defensive line will be a problem for him. The Browns have gone from -7.5 to -7.

That’s all for now, best wishes on your betting strategies for Week 3.