There is a powder keg of risk brewing at every sportsbook in NFL Week 4 action and that risk will be elevated multiple times over in the isolated Sunday night game where just about every bettor has the same opinion on who will cover the spread.

Everyone has some kind of opinion on the game and most of it has Tom Brady and the Bucs winning by double-digits. The Las Vegas SuperBook opened the Buccaneers -6 on Sunday night, went to -6.5 on Monday, and finally -7 on Friday morning. The total has dropped from 50 to 49.5.

“The Buccaneers are four times the decision of any other game at this point,” said Station Casinos VP Jason McCormick and it’s only Friday.

With it being the final game Sunday and having all the live parlays from the first 13 games posted funnel into the Bucs side, the risk is going to be a scary monster for the bookmaker.

Stations Casinos have 92% of the tickets on the game side with the Buccaneers. WynnBet has 95% of their cash on the game taking the Bucs. It’s a similar case at BetMGM, the South Point, SuperBook, and up north at the Atlantis-Reno.

Every book needs the Patriots, so the question is if the risk is so high already why not try to bait some Patriots money by offering something larger. The books know they’ll eventually be at -8 by kickoff, but the money at -7 hasn’t justified a move yet. If worried about getting middled on -7, why not offer some juicy money-line prices on the Patriots?

“We’re at +270 with the Patriots, the highest number in the market, and can’t get a bite,” McCormick said.

I think it’s going to be the same thing on Friday night with the Patriots +7. No one wants that. They just saw rookie QB Mac Jones throw three picks last week in the Saints 28-13 at New England. The Bucs loss at Los Angeles last week isn’t even registering. And no one is buying the Belichick after a loss trend because he doesn’t have Tom Brady anymore. How about Brady coming off a loss?

The books can eventually bait some sharp money to take the Patriots on the spread, but they know the books are in a pickle and know they’re going to have to move higher. So why take +7 now when I can probably get +9 on Sunday before kickoff.

The Bucs are the most popular public bet of the week, which makes the second and third most bet teams even more important for the books to knock out so they don’t feed the parlay beast on Sunday night. 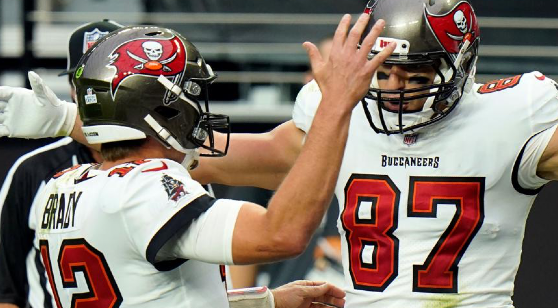 Tom Brady and the Tampa Bay Buccaneers enter Foxboro on Sunday night as the favorites. (AP)

Chris Andrews says his South Point sportsbook bettors have also sided with the Titans (-6.5 at Jets) and Chiefs (-7 at Philadelphia).

Jeff Stoneback from BetMGM says it’s Titans and Chiefs as well after the Bucs.

Marc Nelson from the Atlantis says after the Bucs it’s the Chiefs and Packers (-6.5 vs. Steelers).

McCormick at Stations says it’s the Chiefs and Packers as well.

Let’s just say if the Bucs, Packers, Chiefs, and Titans all cover it will be one of the worst days ever in the sportsbooks, and even more collectively with the sportsbooks across the nation

So let’s take a look at these co-conspirators at taking down the books in Week 4 action.

We’ll start with the Titans which have dropped from -7.5 to -6 at the Jets, but the small public plays are adding up large. It’s basically a bet against the winless Jets. WynnBet has taken 98% of the spread cash on the game with the Titans. BetMGM, Station Casinos, Atlantis, and the South Point have all taken sharp bets on the Jets who are 0-3 ATS. It was announced Friday that WRs A.J. Brown and Julio Jones won’t play this week. That’s their starting receivers. This is a major sharp-public divide. Books are rooting for the sharps.

The average public bettor uses what they saw last to make a lot of their selections. Picking against the Jets has been a winner all three weeks. The Steelers have looked ragged the last two weeks while the Packers won 30-28 at San Francisco on Sunday night football for the entire nation to watch. Packers good, Steelers bad.

The SuperBook opened the Packers as 7-point home favorites over the Steelers and it’s been a steady -6.5 there now as well as almost every other book.

The Jaguars got their first cover of the season in Thursday night’s 24-21 loss at Cincinnati (books did well with the decision) so maybe it is time for the Chiefs to get their first cover. Yes, the Chiefs, Jets, and Washington’s are all in the same class at 0-3 ATS.

The Patrick Mahomes Chiefs era of the last three seasons that made everyone lots of money still has an appeal with the public. Circa Sports went from Chiefs -6 at Philadelphia to -7. Andrews at the South Point reported sharp money taking the Eagles despite the Eagles on a short week and an awful performance on Monday night at Dallas.

Other sharp group moves hitting all over Las Vegas sportsbooks have been taking the Cardinals at the Rams in a battle of undefeated teams in the NFC West. The SuperBook went from Rams -6.5 to -4 which is what most of Las Vegas had posted on Friday.

The Cardinals are 0-5 ATS in their last five against winning teams and the favorite is 9-1-1 ATS in the last 11 meetings. The Rams have won the last eight meetings, all eight since head coach Sean McVay took over.

Two of the three teams that are a perfect 3-0 ATS hook up in Dallas Sunday. It’s the Panthers against the Cowboys with Dallas moving up -4 to -4.5 at Circa Sports. WynnBet has 86% of the cash and tickets written on the Cowboys.

The other 3-0 ATS team is the 3-0 Broncos who will finally play a good team. It’s Week 4 after Denver skated by the Giants, Jags, and Jets. Now they get the Ravens and initially opened as a 2-point home favorite but it’s pick ‘em everywhere now. WynnBet has 87% of the cash siding with the Ravens as well as 74% of the tickets written.

Sharp money also sided with the Giants at New Orleans this week taking the Saints from -8 to -7. It’s the Saints first home game at the SuperDome. The winless Giants will be without key WRs Darius Slayton and Sterling Shepard Sunday, but they weren’t winning with them playing so next up.

The Bills are 17-point home favorites against the Texans and WynnBet is reporting 61% of the tickets written on the game have taken the points with the Texans. Houston rookie QB Davis Mills will make his second start for the injured Tyrod Taylor.

The Monday night game is interesting with the Raiders playing at SoFi Stadium in Los Angeles against the Chargers because it will be like a home game for the Raiders. It always was when the Raiders played at San Diego and the soccer field in Carson the Chargers used to play on. Raiders QB Derek Carr pointed that fact out at a press conference Thursday. That means the home edge here with Chargers -3 is overrated. Circa Sports opened the Chargers -3.5. RB Josh Jacobs is expected to play this week. A running-back gets healthy quickly when the team they’re facing is the worst run defense in the NFL.