Welcome to the NFL Week 5 version of money moves, the weekly guide explaining what people are betting at Las Vegas sportsbooks. It’s a piece where I try to assist bettors everywhere on what teams to be cautious or optimistic about while letting you connect the dots yourself.

When the public is collectively right on most of their games on a Sunday they can do some serious damage, but it happens only two to three times a football season. The public generally plays parlays and their greed has them taking six, seven, and higher teams linked together. They’ve likely hit a large parlay in the past so they’re hooked and do it again a few times a week.

It’s in those parlays that the sportsbooks are born. It’s where they make their money, it’s how they pay the staff, TV contracts, and other service fees to operate. It’s how they build these big beautiful books everywhere with the highest-end video/audio system. If it was straight bets only, there would be no retail books to hang out and watch the games.

Sharp money plays straight bets and they win more than they lose. The public parlay bettor flows with what they saw last as gospel.

I have a friend Joey who bets football every week and absolutely loves it. He’s hit a few six-teamers over the years, but it’s safe to say he’s down overall. He never asks for advice and he never reads what I write about on Fridays. He’s got his own system with a series of six team parlays he says he’s round-robining, but it’s not a round-robin. He’s got 10 $5 six-team parlays with the same few teams intertwined on all of them.

I asked Joey on Wednesday what his key teams were this week and here’s what he told me: “I got a lot of teams I like this week, I may have to double up,” he said. “I like Dallas this week, they’ve got it together and have covered the number in all four games. Then I like the Packers, Bills, and Cardinals. No one has beat the Cards yet, I think the Chiefs are done and they can’t stop the Bills, and the Packers are cheap.”

I’ve found over the years that the biggest public parlay risk sides lose more than they win. There’s a burden of weight on the heavy side and it’s almost as if those teams everyone is piling onto know the public weight is on them.

Last week was the perfect example as everyone had the Buccaneers in Tom Brady’s return to New England causing most books to be in the high six-figure losses if the Bucs covered -6.5. The Bucs won, but only 19-17 as it poured sheets of rain all game long.

I bring up my conversation with Joey because it is right on the line with what Las Vegas SuperBook VP told me on Friday morning. 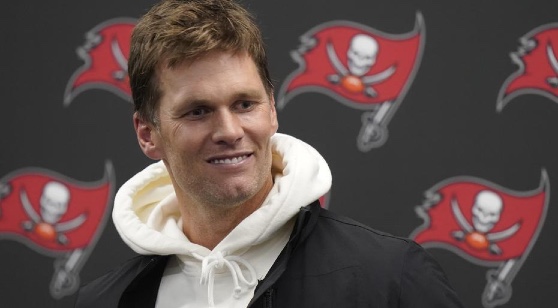 The Tampa Bay Buccaneers were unable to cover the spread in their road trip to Foxboro last week. (AP)

In the same breath, he said his top public play risk is on the Packers, Cowboys, and Bills (+2.5 at Kansas City).

It’s interesting that we have a great match-up in the Sunday night game with two of the public’s favorite teams facing off with the Chiefs and Bills. And when choosing a side, they don’t even look twice because the Bills offense covers games (3-1 ATS) and the Chiefs don’t (1-3 ATS).

Big offenses are attractive to the public because they score a bunch and blow teams out. The Chiefs don’t look like the Chiefs from the last three seasons. The Bills are tied with the Cowboys at the top with a +7 turnover ratio. The Bills also have the No. 1 ranked defense allowing 218 ypg and 11 ppg.

The Chiefs opened as 3-point favorites but now everyone is -2.5 with some type of money attached, everyone except the South Point’s Chris Andrews who uses only flat money and is still at -3. He got sharp KC money laying -2.5 early in the week and is content at -3 for now.

Station Casinos VP Jason McCormick says they have heavy public risk on the Bills in addition to the Packers and Cowboys who are the No. 1 and No. 2.

The Cardinals have everyone believing they’ve turned the corner with a 4-0 start and sharp money bet them early at the SuperBook laying -4 and -4.5 for their home game against the 49ers. Kornegay also said another group came and took the +5.5 with the 49ers. 49ers QB Jimmy Garropolo is expected to start Sunday the 49ers announced Friday. The Cardinals have the No. 1 ranked offense (440 ypg) and score the most (35 ppg).

BetMGM‘s Jeff Stoneback said they got sharp play on the Cardinals as well, but says their biggest risk of the week is the Raiders again. Last week too in their Monday night loss at the Chargers which was actually like a home game for the Raiders.

The Raiders have moved up from a 4-point home favorite against the Beras to -5.5, and Stoneback says they’re already really high with public money on the Raiders. If you take a look at where the Raiders play the closest books are all BetMGM books at Mandalay Bay, Luxor, Excalibur, New York New York, MGM, Park Place, and Aria are all in the vicinity. Tourists and locals alike are betting the Raiders on game day. The Bears will start Justin Fields again following the Bears 24-14 home win against the Lions behind Fields.

The Cowboys face the Giants who they are 6-2 ATS against in the last eight meetings. Public loves the Cowboys but the number didn’t move on parlay build-up. Sharp money at BetMGM and Station Casinos took the Giants +7.5 and the spread is now -7 all over town. The Giants come off their first win with a thrilling overtime victory at New Orleans.

The Bengals have received sharp action at the Superbook and Stations for their home game against the Packers. The public loves the Packers, sharps like the Bengals, a home dog getting +3. The SuperBook has the Packers -2.5 -120 while most of the other books have some variation of the Packers -3 EV or -105. But the good old South Point has a 3-flat.

Sharp bettors BetMGM and Stations also pushed the Vikings from -8.5 to -10 at home against the winless Lions.

Another team to note here is the public jumping on the Buccaneers in parlays who are -10 at home against the Dolphins.

And to my friends in England, once again I am so sorry the NFL continually treats you guys as if you’re stupid. Every year it’s the worst teams the NFL sends over there, this Sunday morning (6:30 am PT) it’s the Jets against the Falcons (-2.5 -120). What a horrible display of diplomacy on our part. Next time send them a fruit cake, or an empty picture frame, or maybe some ordinary candles. We’re supposed to be allies with England, right? But we send them the two worst displays of American football? I promise we still love you, England.

All the best, enjoy the week.