Last week was the first time this season we didn't see an 'over' cash for the game involving the team that scored the fewest points the week prior, and given that the Houston Texans have already been a frequent flyer in that category, with how bad they've been so far, we were bound to see an 'under' come through eventually.

Week 7's action brings us a three-team tie, ironically all scoring just three points, for those that prefer to keep looking at 'overs' for these lower-scoring teams, and with Chicago, Carolina, and the Kansas City Chiefs of all teams being those three franchises, I do believe there is still plenty of meat on the bone of that trend. I don't need to go into the idea of Kansas City being a good 'over' team with the offensive weapons they've got combined with a league-worst defense, but there are interesting things to consider with the other two teams as well.

Chicago's back at home hosting a 49ers team that had to play in that deluge on SNF which could affect the perception of that struggling offense somewhat, as the total for that 49ers/Bears game has already dropped a bit from being the lowest opener (41), to still being the lowest total on the board by far this week (39.5). 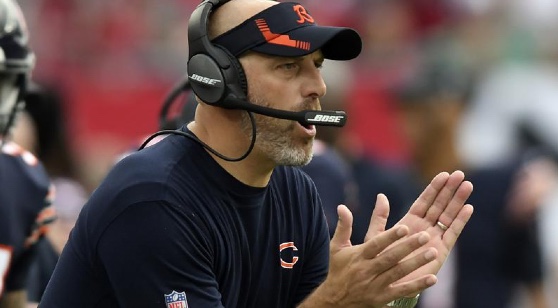 The Chicago Bears have gone UNDER the point total in six straight games. (AP)

Carolina is another offense that's seemingly fallen off a cliff in recent weeks as their name continues to get mentioned in the Deshaun Watson rumors as they try to upgrade the position too. But the Panthers are in Atlanta for a NFC South divisional game, and it's not like the Falcons defense is anything to write home about either.

How bettors decide to deal with those total betting options will be interesting to see throughout the week though, especially with the two non-KC games there already seeing 'under' support early in the week. But let's take a peek at a few of the other totals on the board.

The one play from last week's piece that couldn't have really worked out any better was going with flipping the total results in the AFC East rematch game between the Jets and Patriots. That total took 'under' support for the most part throughout the week and turned out to be a no doubt winner for the 'over' as Mac Jones and that Patriots offense blew up to the tune of 54 points, going over the full game total by nearly two TD's themselves.

The 54 points New England scores does put the Patriots in that 'under' role of being the highest scoring team from a week ago, a run that has been about break-even this year as I've documented in past weeks, and did connect last week in the LA Rams game. But with the Chargers own offense coming off a tough outing and having a bye week to regroup, that theory is not something I'm looking to get involved with either.

Instead it's the two divisional rematches we've got going in Week 8 that both suggest an 'over' play is in store after they each cashed 'under' tickets in the first meeting.

The first of those matchups is the Miami/Buffalo game (total: 48.5) after the Bills won the first meeting 35-0 back in Week 2. That loss was actually the start of this current six-game losing streak for Miami as they've been the constant player in the Deshaun Watson trade rumors, but this organization might be more inclined to focus on their defensive shortcomings. Miami's allowed an average of 31.83 points per game during this six-game losing streak, only managing to keep the Jacksonville Jaguars below 27 points.

Now the Dolphins welcome in a Buffalo team who has scored 30+ in five straight games,now off a bye week and after a tough-to-take loss. The situation screams success for Buffalo's offense this week and if they continue their run of scoring 30+, any 'over' play just needs 19 points from this Dolphins team that really has nowhere to go but up against this Buffalo defense after getting blanked in the first meeting.

Now don't get me wrong, the Bills defense is still a very good unit overall, and after seeing KC and Tennessee in their last two outings, I doubt they'll feel threatened at all facing Miami this week, or Jacksonville and the New York Jets the next two weeks. And while the argument could be made that this upcoming three-week stretch is where Buffalo's defense could really put the clamps down and put up some phenomenal numbers, there is always that question of motivation for the Bills defense to play lights out when they have to figure that their own offense just has to show up to outscore these next three foes.

Furthermore, as big home chalk (-13.5), there is always the possibility that the Bills put this game to bed early on and go into a prevent shell later in the game with the result already in hand, allowing Miami's offense to get plenty of junk yards during garbage time and putting up some points in the process.

Five straight meetings between these two rivals cashed 'over' tickets before the Week 2 meeting this season, and with weather not projected to be a huge issue in Buffalo this week, I do believe we see 50+ points in this meeting as well.

The other division rematch game this week is the Tennessee/Indianapolis game as one where flipping the results from the first meeting suggests an 'over' play as well.

Tennessee won that first meeting 25-16 as the Colts offense couldn't do much of anything in terms of getting into the end zone (scored just one TD), despite being +3 in the turnover battle that day. Furthermore, with these two defenses currently ranking 23rd (Indy) and 24th (Tennessee) in opponent yards per play at 5.8 and 6 yards respectively, I don't think we see a contest where both QB's throw for under 200 yards like they did in that first meeting either.

For one, the Colts offense has finally found a rhythm these past few weeks with Carson Wentz being able to move the ball more consistently, and as the Colts are the ones looking up at Tennessee in the standings, seeing the Colts take more chances and generally being more aggressive is something I expect to see.

At the same time, we've all seen just how good the Titans offense can be when things are clicking, and even though they were blanked in the 2nd half against that porous KC defense last week, the game was already well in hand and Tennessee preferred to use their dominant running game to bleed out the clock. Tennessee has an offense that can threaten 30+ points on any given week – they did that against that very good Buffalo defense – with with the Titans team total sitting at 25.5 juiced to the 'over' (-120), it's not like getting 28+ from them is a huge ask.

So I'm flipping the total result from the first meeting here as well as this is another game in Week 8 I expect to see 50 or more points scored.