The first Sunday Night showcase game of the 2020 season features the 2018-19 runners up in the LA Rams, opening up their new stadium in LA. I don't know this for sure, but it's probably the first NFL stadium – first stadium anywhere – to be officially opened and have an attendance of zero for it's first event, but that's where we are in 2020.

The Rams welcome in a team that's quickly become the preseason darlings in the marketplace; the Dallas Cowboys.

No matter where bettors turn, chances are they've heard someone touting the Cowboys futures lines for division/conference/Super Bowl, as seemingly everyone is head over heels in love with this team. It's all about the level of talent and depth that Dallas has for everyone and here they are in the Opening Week with a chance to prove everyone's who's humped their leg all summer right as road favorites in a stadium opening.

Will the Cowboys live up to those lofty expectations and start the year 1-0 both straight up (SU) and against the spread (ATS)? 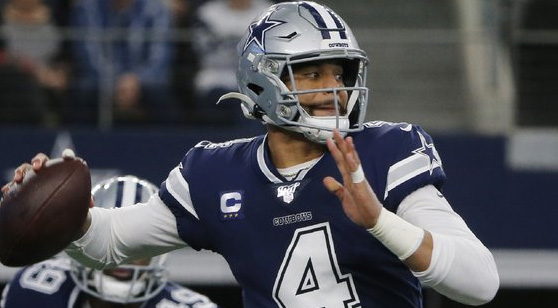 The Dallas Cowboys will open the 2020 regular season as road favorites against the Los Angeles Rams. (AP)

Like Thursday's game, there is minimal interest in looking at the total for this game, and if forced to make a selection it would be on the 'under' again.

As is the case with any team that gets fawned over in the futures markets like Dallas has – especially given that it's the offense talent the Cowboys have on paper that turns all those folks on – 'over' action will follow in their games regardless.

A total that opened at 50 back in the summer, jumped all the way to 52 for a time, before coming back to it's current standing of 51. I would venture a guess that by Sunday this number is back on the upward move, threatening even 53 potentially. So if you do like the 'under' for this game, waiting likely doesn't hurt as you know it's not likely to go any lower than 51 to begin with.

Two of the last three “Stadium Openers” have cashed 'over' tickets for bettors (Atlanta in 2017, Minnesota in 2016, SF in 2014), but the lone under was that Vikings home game in 2016 against the Packers when Minnesota closed as a +1.5 dog. Sounds awfully familiar to what we have going with this line doesn't it?

Cowboys vs. Rams
Handicapping the Side

This fawning over the Cowboys talent this summer seemed to begin in earnest when wide receiver CeeDee Lamb fell into the Cowboys lap during Round 1 of the draft. I'm not sure if Lamb was viewed as the “missing piece” for Dallas, or if somehow bringing in quarterback Andy Dalton to back up QB Dak Prescott is part of the “depth” that's mentioned about the Cowboys this year, because other than that, the entire offense is essentially the same as the 2019 Dallas Cowboys team that finished 8-8 SU and missed the playoffs.

Yes, there were issues with the head coach, which they've now replaced with Mike McCarthy – a guy who had many similar coaching blunders during his final years in Green Bay that resembled what Jason Garrett did in Dallas for years – and the Cowboys record in one-score games last year was awful (suffered five losses they probably shouldn't have), so a positive regression should be coming in 2020.

But all that Super Bowl talk about the Cowboys this year? Well, you can just go back to this piece I wrote from the beginning of the calendar year and see that now 23 of the past 30 Super Bowl Winners made the playoffs the season prior.

Dallas did not see January football last year, and while they are likely too this season, it's still hard to shake the idea that the Cowboys will still find ways to get in their own way and threaten being an 8-8 SU or worse team again like they have been in six of the last 10 years.

Needless to say, I am nowhere close to as high on the Cowboys as many others are in the betting market, and it is that market that has shown plenty of love for the Cowboys in Week 1. An opener of -2, quickly got bet up to -3, and while the vig changed quite a bit on that -3 during the week, we've since seen another move back to to -2.5 for Dallas which is very interesting.

Given all the futures support for the Cowboys, an early week bump in the line should be expected probably every week for the next month in Dallas games going forward. The move back comes thanks to plenty of resistance though, and it's why only the vig changed while at -3, because there was no way oddsmakers wanted to hang a -3.5 up there.

It may only look like a half-point, but a move through a flat -3 is one of the most significant moves you'll see in a NFL game on a weekly basis. Bettors would have snapped up that +3.5 on the Rams once it hit the board, even some of those same bettors that snagged Dallas -2 would be doing that, and it's why the number never got any higher.

The Rams are a franchise that's kind of been slept on this summer while the Cowboys hype train picks up passengers at every stop, and that's probably just fine with head coach Sean McVay and company.

Los Angeles has spent the last 12 months or so trying to get out of some of the bad contracts they saddled themselves with, and building another team around QB Jared Goff that can compete at the highest level in this league.

There is no “Super Bowl hangover” looming over the Rams this year, and just like the Cowboys, made one significant change offensively, although it was a subtraction in cutting ties with Todd Gurley.

So you've got two rosters that are essentially the same as last year, one in the Rams who finished 2019 with one more win, are at home, catching points, and opening up a new stadium to boot. The new stadium vibe does lose a bit of it's appeal with no fans, but at the same time, I can't imagine a rookie WR like CeeDee Lamb popping off after what limited work he was able to do in learning the system etc, in a league where rookie WR's tend to always need multiple weeks to get their footing.

The last two teams to open up a new stadium have gone 2-0 SU and ATS the past few years, and we even had a near similar occurrence then in terms of line and scenario with that Minnesota game in 2017 when they closed as a 1.5-point home dog vs Green Bay. The Vikings ended up winning that game 17-14.

Give me the points with the Rams in this game, and buy it up to +3 if you have to just to be smart about it. But those who are less risk averse probably want to splash around with the ML as well.

Remember, as the Mike McCarthy era starts in Dallas, we had eight teams with new head coaches in 2019, and the Week 1 record those teams posted was 1-7 SU and 3-5 ATS. Not exactly the backing I'd want to have behind an already public darling in the Cowboys.