Week 3 of the NFL features two matchups where 2-0 teams will be meeting 0-2 squads and one of them takes place from Colorado, as the Denver Broncos will look to stay undefeated against the winless New York Jets.

To no surprise, the Broncos have been installed as the largest favorites in Week 3 but could that be a recipe for disaster?

Why the Jets will Cover

It’s not easy making a case for the Jets in this spot, especially with an offense that’s averaging 10 points per game and rookie quarterback Zach Wilson hasn’t looked sharp and his league-leading five interceptions has hurt the team.

Despite the early jitters for Wilson and the offense, they haven’t been run in either of the first two games. A five-point loss (19-14) to Carolina in Week 1 is looking better now that the Panthers are the first team to go 3-0 and the 25-6 loss at home to New England was all on Wilson as his four picks led to 16 points. The Jets put up more yards, first downs and they controlled the time of possession too.

Wilson, a Utah native and BYU standout, is very familiar with the elements and the change of scenery could be welcoming for the rookie. Whether you buy that narrative or not against a good Denver defense is your call but if he doesn’t turn it over, staying within the point-spread is very arguable.

Especially when you look at the other side of the field in New York and point to their defense. The unit is ranked ninth in total defense (320.5 yards allowed) and 13th in points per game (22.0). Jets head coach Robert Saleh is a defensive-minded coach and you can see his influence already on that side of the ball as the team is ranked third in defensive third down conversions (26.9%).

What’s impressive about Denver’s start is that both wins this season came on the road, which means that Sunday’s game is the home opener for the Broncos. The stadium should be rocking, usually is, but will it matter? According to one angle -- NFL Teams that are playing their first home of the season in Week 3 are 29-55 (34.5%) against the spread (ATS). FYI - Denver isn’t the only team in this spot. (49ers, Cowboys, Vikings).

Another angle delivered to VI this week came from expert Matt Blunt and his popular Hot & Not Report. 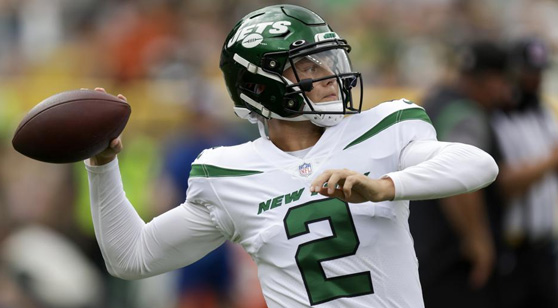 Rookie QB Zach Wilson has struggled for the Jets, tossing five interceptions while only completing 55.7 percent of his passes. (AP)

Why the Broncos will Cover

In Teddy We Trust

Denver quarterback Teddy Bridgewater won the starting job in the preseason and the veteran continues to prove the naysayers wrong. Bridgewater is never going to lead the league in touchdowns or yards but he’s accurate, ranked first (77.1%) and he doesn’t make many mistakes, also ranked first in Quarterback Rating (QBR) with 82.7 through two games. The Broncos are tied for first in the league with 10 trips to the redzone, proving that Bridgewater knows how to move the chains.

If you’re going to lay double-digit points in any sport, you should always feel more confident when you have a major defensive edge and that’s the case with Denver. The Broncos have been a beast in total defense, allowing 251.5 yards per game and the unit is ranked fourth against the run (67.5 YPG) and fifth versus the pass (184 YPG). The defense is allowing 13 PPG, ranked fifth, surrendering just four scores this season. However, that number could easily be 6.5 PPG because one touchdown came on the final play of the game versus the Giants in Week 1 and the other was a kickoff return touchdown last Sunday to the Jaguars.

Linebacker Von Miller looks healthier than ever through two games, tallying all three of the sacks for the Broncos this season. While that number isn’t high, the pressure has only allowed quarterbacks to complete 51.4% of their passes, which is ranked first. Another factor with that low percentage has been due to rookie cornerback Patrick Surtain II. The son of a former NFL standout, Patrick Surtain, the youngster is already showing that pedigree by grabbing an intercpetion in the Week 2 win at Jacksonville.

Playing in Mile High isn’t easy and Jets haven’t been exactly the best road team lately nor have they played well in the month of September. Going back the past six seasons, New York is just 1-9 SU and 2-8 ATS as visitors in the first month and that includes a Week 1 loss at Carolina this year.

Meanwhile, Denver has gone 15-5 SU and 10-8-2 ATS in its last 20 home games played at home in September. However, the club has lost four straight so if you take out the poor outings each of the last two seasons, then the record is 15-1 SU and 8-6-2 ATS. 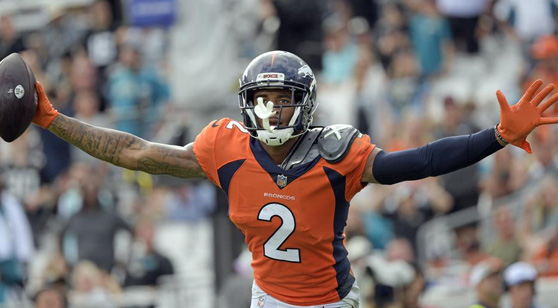 Broncos rookie DB Patrick Surtain II has looked very sharp and living up to his hype as the No. 9 overall draft pick. (AP)

Inside the Betting Stats - Jets vs. Broncos

The two AFC clubs have had 38 all-time meetings and Denver owns a 21-16 series record that also includes one time. The pair met last season in New York in a Thursday Night Football appearance and the Broncos captured a 37-28 victory.

Bettors should tread lightly on that result and other recent encounters knowing that there were a lot of different faces in that matchup, including two quarterbacks in Denver's Brett Rypien and New York's Sam Darnold that are no longer starting signal callers with these franchises.

Oddsmakers sent out a total of 42 ½ for this matchup and the number has already dropped to 41 ½ as of Friday afternoon. Both clubs enter this game with identical 2-0 ‘under’ records and based on the defensive form and lack of offensive punch, another lower scoring affair should be expected.