The Oregon Ducks look to shake off a tough season-opening game loss and rebound against the Seton Hall Pirates, coming off a loss themselves. The action is set to take place at the CHI Health Center Omaha in Omaha, Nebraska.

Oregon enters this game as the slight -1-point favorite, as a few sportsbooks have this matchup as a straight pick em. With close to or even odds, this game is considered a toss up in the eyes of bookmakers. Oregon's loss to Missouri is an obvious factor in the close spread, but the Ducks still present the better roster while Seton Hall is winless away from New Jersey.

Seton Hall played a closely contested game against Louisville to open the season, but lost by 13 points to Rhode Island in their latest road game. That is a step backwards for the Pirates, who are 0-2 when playing away from the Prudential Center. Expect both teams to come out with urgency, looking to get back on track before beginning the season in a shallow hole.

Oregon's loss was definitely a surprise, although Missouri has a lot of potential to be a consistent threat for most SEC teams this season. Despite the loss, there were positives to take away from the Ducks first game - which begins with the pair of seniors in Eugene Omoruyi and Chris Duarte.

The big difference for Oregon seems to be the injury to N'Faly Dante, who is playing with a previously injured knee. The sophomore was actually a top Wooden Award candidate, but struggled in 22 minutes of action against Missouri and is since off the betting list.

The good news for Oregon fans, bettors and Dante himself is that his defense was impressive. He saw three steals and three blocks against the Tigers, so there is positivity for the expected star to build off of entering the game against Seton Hall.

Omoruyi is the difference maker for Oregon however, connecting on 33.3% of 3-pointers and hitting 81.8% of his free throws this season.

As stated, the big issue for Seton Hall is being able to win big games away from home. Omaha is quite far from New Jersey, and the Pirates last game against Rhode Island didn't help sway the conviction needle towards Seton Hall. The Pirates are averaging a little less then 75 points per game, struggling to find consistent scoring outside of Sandro Mamukelashvili and Jared Rhoden.

At a certain point, Myles Cale, Takal Molson, Shavar Reynolds or Tyrese Samuel will need to have a great game for Seton Hall to close out against a good opponent on the road. All the names just mentioned average anywhere from nine to six points per game, on the cusp of having a breakout night to alleviate the offensive load of Mamukelashvili and Rhoden. 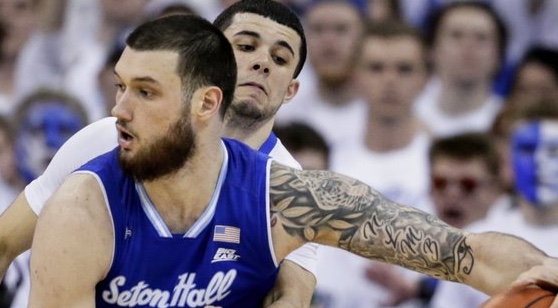 Sandro Mamukelashvili opted out of the NBA Draft, returning to help push the Seton Hall Pirates back into the Big East picture. (AP Images)

Rhoden needs to perform better however, as the two losses suffered from Seton Hall have seen the Baldwin-native score just 11 points or fewer. Rhoden was able to post 20-plus points when he hit nine of 10 shots from the charity line, so the Pirates will need Rhoden to play much better and much more aggressive and hope the others outside of Mamukelashvili will follow.

Seton Hall's experience should help them have a successful season, regardless of the outcome against Oregon. Seven of the Pirates eight top players are upperclassmen, which should help more than hurt as the season progresses.

Mamukelashvili, Cale and Reynolds, Jr. have scored 53% of all the Pirates' points this season - so its fair to say Rhoden is going to be the difference for Seton Hall in this one.

Oregon came from behind to beat Seton Hall in the Bahamas a year ago, although both Payton Pritchard and Myles Powell are no longer with the schools. Still, its hard to forget Seton Hall blowing a 19-point lead which Mamukelashvili is probably still thinking about.

It seems justified to consider Seton Hall looking to get revenge for the game that slipped away a year ago. The Ducks went on 14-2 run in the final six minutes, but again, no Pritchard who scored 12 second half points.

This is one of the closest games since the new college basketball season has started, as both teams are very even and playing desperate early. This should come down to a final possession based on given odds and various computer simulations. If you live in New Jersey, perhaps this is a blessing in disguise that you can't bet this game.

Oregon has a better track record of winning as the favorite, although they have four total injuries including N'Faly Dante and LJ Figueroa. Seton Hall struggles on the road but is playing with revenge on their minds. This is quite the topsy turvy game to chose, but both teams are a combined 3-1 with the O/U, so perhaps start there.

If a prop bet is possible, consider odds to see this game go into overtime. Those odds typically go for +1200 or higher, and can be taken in the 'Result at End of 2nd Half' market by taking the 'Tie'. There are reasons to hedge a winner with the game going into overtime, because all signs point to a 50/50 split in this one.