The 11-seed UCLA Bruins are back in the Elite Eight for the first time since 2008, but don't consider this school an underdog. Well, they might be a big underdog this season, but they're also a school which has 11 national championships under its belt. They are one of three Pac-12 Conference teams which are in the Elite Eight, with the AAC, Big Ten, Big 12, SEC and WCC with one representative apiece.

UCLA notched its spot in the Elite Eight with an impressive victory over the two-seed Alabama Crimson Tide. The Bruins held a 40-29 lead at halftime against Alabama, and they led most of the second half, too, against a high-octane offense. The Tide was able to tie things up at the buzzer on a beautiful three, but overtime was all UCLA. They lost their leading scorer to foul trouble, as Johnny Juzang was sent to the bench, but they were able to outscore the Tide 23-13 in the extra session for the impressive 88-78 win to advance to face Michigan.

Michigan won 76-58 against Florida State in a game which was supposed to be close, but ended up not being close. They easily covered the 1.5-point number, as the Seminoles tried to muscle the Wolverines, but Michigan would not be intimidated. While they managed just the 76 points, which was their lowest offensive output of the tournament to date, they also allowed just 58 points, easily their best defensive showing in the three NCAA Tournament games.

The Wolverines have had to deal with the loss of Isaiah Livers during the Big Ten conference tournament, but they have acclimated to life without the forward. Franz Wagner registered 13 points with 10 rebounds, five assists and a blocked shot in his 35 minutes vs. FSU, while Hunter Dickinson went for 14 points, eight rebounds and two blocked shots. Brandon Johns Jr. also contributed with 14 points to tie a team high, and he grabbed six boards.

Florida State was intent on testing Michigan's physicality and defensive ability, and they gambled, and they lost. Even without Livers, this team has a turgid defense capable of handling anybody. While they had a couple of high-flying games against Texas Southern, a weak opponent, and LSU, an up-tempo offense which loves to run, the Sweet Sixteen was more of a Michigan game. Plenty of good passing, plenty of rebounding and a slow, methodical offense with a lockdown defense. It's been the key to success for Juwan Howard's fab group.

At one point UCLA was running neck-and-neck with USC for the perch in the Pac-12, but the Bruins lost their way for one reason or another down the stretch. They dropped the final three games of the regular season, as a late loss at Colorado really seemed to knock them off the rails. They were dropped 82-74 at Oregon on March 3, and they were edged 64-63 in the final at USC on March 6, although they did at least cover in that one.

The Bruins likely saw their seed tumble significantly due to that late-season collapse, and they didn't really beat anybody of note during the regular season. But an 11-seed, and First Four team? That was likely a mistake, as this team probably should have been at least on the eight or nine line, but that's easy to say now. Still, they lost 77-70 to Ohio State on a neutral court, they were dusted by 15 against San Diego State, and they split with Colorado, won its only regular-season game against Oregon State, lost its only game with Oregon. They were also dumped from the Pac-12 tourney in OT by Oregon State, which looked like a bad loss at the time.

Head coach Mick Cronin now has UCLA on the precipice of becoming the first First Four team since Virginia Commonwealth since 2011 to go to the Final Four, and they were the third No. 11 to drop a No. 2 in the history of the NCAA Tournament.

Including the First Four, an 86-80 overtime victory over Michigan State, the Bruins have rattled off four straight victories with four covers. Overall, three of the past five games for UCLA have gone to overtime, with their Pac-12 tourney game against Oregon State also unable to be decided in regulation.

The results have been mixed, as far as defense, but that comes along with the opponent. Of course the first game against Michigan State, an 86-80 overtime win, went OVER. As did the 83-79 OT loss to Oregon State. In fact, each of the three overtime games went OVER, which is no shock, as OT games rarely go UNDER unless you're Oral Roberts and Ohio State. Their second-round win over Abilene Christian, 67-47, ended up going well UNDER, as did their showdown with BYU in the opening round.

Looking at their past eight games overall, they're just 4-4 SU/5-3 ATS, with four OVER and four UNDER results. On paper, that doesn't look very impressive. Or, on the computer or phone. But, anyway, the past four have been wins and covers, and they're playing with a ton of confidence, and everything has come together for this group at the right time. They have the elite pieces to make a ton of noise. Juzang is averaging 18.4 PPG with 3.6 RPG in five postseason games, and he is hitting 81.8% from the free-throw stripe. Jaime Jaquez Jr. is putting up 15.6 PPG with 6.8 RPG with six total steals and four blocked shots in his five postseason outings. Jules Bernard has also rolled up 13.8 PPG and 7.2 RPG so far, too.

The Bruins have cashed in four straight games, they're 4-0 ATS in their past four against winning teams, and they have strung together covers lately, too. They're 13-5-1 ATS in the past 19 games following a cover, and 18-7-1 ATS across the past 26 following a straight-up victory, too.

Michigan picked up back-to-back covers in an 86-78 win over LSU in the second round, and a 76-58 win over Florida State in the Sweet Sixteen. They failed to cover against the 16-seed Texas Southern, 82-66, as the Wolverines didn't come close to hitting as 24.5-point favorites. Prior to that, the Wolverines were just getting used to life without Livers, and they fell to Ohio State 68-67 as five-point favorites in the Big Ten tournament.

Over the previous nine games overall, Michigan is just 5-3 SU/4-4 ATS, and the UNDER has outpaced the OVER 5-3. Those aren't terribly impressive numbers, and makes it look like the Wolverines can be had. But they have shown against a top SEC opponent, and the ACC runners-up in the past two games that this team is, in fact, elite.

As far as the totals are concerned, it's all UNDER all the time for Howard's club. The UNDER is 13-5 across the past 18 games overall for Michigan, including seven of the past 10 games, and 12-5 in the past 17 games as a favorite.

Juzang didn't have a very good game against Alabama, and the Bruins were still able to survive and thrive. He hit just 5-of-18 from the field, scoring 14 points with four rebounds and two steals, while misfiring on five of his six three-pointer attempts. That won't happen again. Despite shooting just 39% from the floor, and 10-of-29, or 34% from the field, the Bruins were able to advance.

That's because Bernard, Campbell, Jaquez, Cody Riley and David Singleton were each able to join Juzang with double-digit point totals, a nice and balanced attack. Riley also swatted four shots in his 26 minutes, and that will be key against Michigan's big bodies down low.

Dickinson is leading with way with 13.8 PPG in five postseason games, while adding 6.8 RPG. He is also someone who can be relied upon to handle the ball late in games, hitting 78.9% from the charity stripe in the postseason, and, more importantly, 75.0% in the regular season. That's a much larger sample size.

In fact, Michigan is a pretty strong free-throw shooting team, so if it is a close game down the stretch, that's a game the Wolverines will usually not win. Of course, stats and analytics, etc. be damned. Ask SEC Player of the Year Herbert Jones about all of that. He was a good free-throw shooter, and missed two key free throws down the stretch in regulation vs. UCLA. 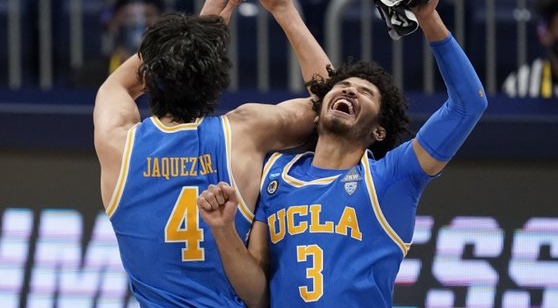 The UCLA Bruins look for their fifth straight win when they take on No. 1 seeded Michigan in the Elite Eight. (AP)