USC punished fellow Pac-12 rival Oregon in the Sweet Sixteen, registering an 82-68 win to easily cover a 2.5-point number as the OVER (138) easily connected. The Trojans have won each of their three games in the NCAA Tournament by 14 or more points, easily covering each outing.

The Trojans were on fire from the field against the Ducks, hitting 57 percent from the field (31-of-54), as Isaiah White dropped 22 points and Tahj Eaddy was good for 20 points. Evan Mobley and Isaiah Mobley were a two-man wrecking crew, too, as they combined for 23 points, 14 rebounds, eight assists and three blocked shots, too. USC was an amazing 10-for-17 on three-pointers, too, while going 10-of-12 from the free-throw line. There wasn't much which wasn't falling for USC, but now they get the No. 1 overall seed in a West Coast showdown.

Gonzaga rolled past Creighton 83-65 as a 12.5-point favorite in the Sweet Sixteen, and like USC, they are 3-0 SU/ATS in the NCAA Tournament while winning each of its games by double digits. The Bulldogs nearest miss, if you want to call it that, was a 16-point win over Oklahoma as 15.5-point favorites. They covered at most shops, and the UNDER is 2-1 for them so far thanks to outstanding defense. The Zags are allowing just 63.7 PPG in three games in the Big Dance.

Against Creighton it was a balanced attack, as per usual. Drew Timme led the way with 22 points, six rebounds, four assists and an impressive 10-for-14 shooting performance. Andrew Nembhard dropped 17 points while dishing out eight assists and turning it over just one time, and he connected on three of his five attempts from behind the arc.

Joel Ayayi had 13 points and eight dimes, while Corey Kispert was good for 12 points and seven assists while adding two steals and a blocked shot, just one of two swats for the Zags, if you're looking to pick on them for something. Also, Jalen Suggs managed just nine points, so it's scary, but they can be even better.

The Trojans presumably will give the Bulldogs their biggest test of the NCAA Tournament. And while lower seeds have really ruled the roost in this season's installment of March Madness, Gonzaga has very much looked the part of national champion favorite and haven't shown a lot of chinks in the armor.

USC is into the Elite Eight for the first time since 2001. The Trojans are one of three teams representing the Pac-12 in the Elite Eight, but all three are underdogs as they look to punch tickets to the Final Four. The Trojans might actually have the best chance, but ousting the Bulldogs is a rather tall order. The biggest concern, which didn't show its ugly head against Oregon, is free-throw shooting. USC has hit just 64.4% of its free throws this season to rank a dismal 325th in the nation. Eventually, in a close game, that might end up being their undoing. Will it be Tuesday?

The Trojans have done a good job defensively, and they will give the Bulldogs a run for its money if their defense digs in early. USC allowed opponents to hit just 39.1% from the field, good for 11th overall in the country, while yielding just 64.1 PPG to check in 38th. Oregon solved them a little bit, but they also know USC a little better than most. Kansas could muster just 51 points in a 34-point whitewashing in the second round, and Drake posted just 56 points in a 16-point setback in the opening round.

The Bulldogs ranked No. 1 in the nation in both scoring (92.9) and field-goal percentage (55.3). If they have an Achilles' heel, and it isn't a big one, especially against USC, it's at the charity stripe. The Zags hit just 73.2% from the line, or 93rd in the country.

Defensively Gonzaga is just so-so, too, allowing 69.3 PPG to rank 149th, while allowing does to hit 41.9%, or 105th in the nation. The Bulldogs are also just a mediocre 140th against the three, with teams hitting 33.0% against them from behind the arc.

The Trojans were stunned 72-70 by Colorado in the Pac-12 Tournament in the second round, but that might have been the best thing to happen to them. After going 0-2 ATS with a pair of OVER results in the Pac-12 tourney, USC is 3-0 SU/ATS with the total going 1-1-1. The offense has posted a healthy 83.5 PPG across the past two tournament games, as the Trojans offense is peaking at the right time, and against good teams from Kansas and Oregon.

USC's 3-0 ATS run is its best since they rattled off six consecutive covers from Jan. 28-Feb. 17. This won't be their first game against a West Coast Conference (WCC) team this season, as they pushed past BYU back on Dec. 1 as 2.5-point underdogs in a 79-53 win. They also topped Santa Clara in an 86-63 win on Dec. 29 as 9.5-point favorites, but Gonzaga is obviously a different animal than those two WCC teams.

While the Trojans are 3-0 ATS in the past three, they're still 5-6 ATS across the past 11. The results from the regular season cannot be ignored, but their recent hot streak carries a lot more weight than something which happened over a month ago.

The Bulldogs are the first team since the 2014-15 Kentucky Wildcats to finish the regular season unbeaten, but we haven't seen a team win it all with an unblemished record since the Indiana Hoosiers back in 1976.

The Bulldogs have all five starters with 10.2 PPG or more points per game in each of its five postseason games. Timme is good for 18.8 PPG and 8.0 RPG, while hitting a tremendous 69.2% from the field in the WCC tourney and Big Dance. Kispert has been a tremendous secondary option with 16.4 PPG while logging nearly 32 minutes per game in the postseason. Ayayi has chimed in with 14.8 PPG and 8.4 RPG, while Suggs has 13.8 PPG in his five games in the postseason despite single digits against Creighton. 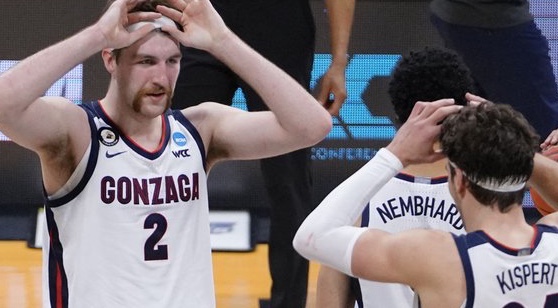 The Gonzaga Bulldogs look to win their 30th straight game this season, facing a familiar foe in the Elite Eight. (AP)