The Georgetown Hoyas (2-1) and San Diego State Aztecs (3-1) meet Thursday night in the Wooden Legacy at the Anaheim Convention Center. Tip-off is scheduled for 11:59 p.m. ET, and the game can be viewed on ESPN2 roughly 30 minutes after the conclusion of USC-Saint Joe's game in the same event.

After a stunning loss to Dartmouth of the Ivy league in the opener, losing 69-60 as a 16-point favorite, the Hoyas have rebounded with a pair of wins and covers against Siena and American. It's not exactly running the gauntlet, but a pair of wins over the Eagles and Saints have rejuvenated the Hoyas and given them confidence heading into this event.

Georgetown has seen the offense improve gradually since the first game, too. They looked like they were shooting at a basket with a lid, posting just 60 on the Big Green while shooting just 39% (23-of-59) from the field with 8-of-23 (35%) from behind the 3-point line. The Hoyas also turned it over 16 times, which simply won't do. Georgetown shot 44% against American, while turning it over 13 times, and then they hit a gaudy 57% (28-of-49) percent against Siena with just 10 turnovers and seven steals, so they're certainly trendy in the right direction.

San Diego State also has a loss, and it has been tested way more by top-tier opponents so far. The Aztecs opened with a win over UC Riverside before a loss in its only true road trip of the season at BYU. There's no shame in that game, though, as the Cougars dismantled a Top 10 ranked Oregon team in Portland last week. The Aztecs bounced back with a win over Arizona State before slipping by Texas-Arlington. They're on a two-game win streak heading into this game, although they still could use quite a bit of fine tuning.

The Hoyas have been gradually getting better after the rough start in a non-conference loss to start. What makes the loss to Dartmouth all the more shocking is that it was a home game, and the Big Green were predicted in the preseason to be in the bottom half of the Ivy League. But things happen, and it's better to get the bad games out of the way early and learn from them. Head coach Patrick Ewing's group looks to have done just that, as they have won and covered both against American and Siena, a couple of teams picked to finish in the upper half of their respective leagues.

Georgetown seemed to enjoy neutral-site affairs last season, going 4-1 SU/ATS in the postseason, including a stunning run in the Big East Tournament, winning four games in four days to win that very difficult conference's postseason tourney. There isn't a lot to glean over the long haul, as get this, Georgetown is 6-6 SU/ATS across the past 12 neutral-site games, with six OVER and six UNDER results. That's wacky.

San Diego State registered a win and cover, barely, against UC Riverside in the first game. The number was 12.5, and the Aztecs won by 13. That's their only cover of the season, as they lost at BYU by a 66-60 count as a three-point 'dog on Nov. 12, edged Arizona State 65-63 as an eight-point favorite next time out, and they scraped by the Mavericks of UTA on Nov. 20, winning 68-62, coming nowhere near covering the 19-point spread. The OVER against Arlington, again, just barely, is the first after a 3-0 UNDER run to open the season. 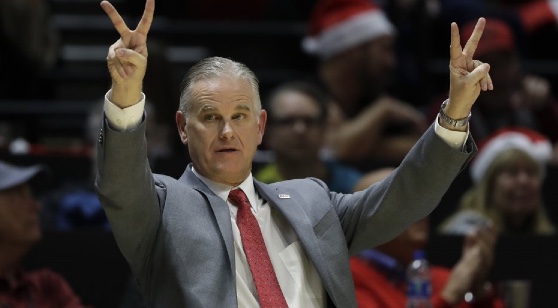 Inside the Stats - Georgetown Hoyas

The triumvirate of Carey, Mohammed and Trey Pulliam could to give the Aztecs fits. Georgetown has a handful of options to score the basketball, and a bunch of big bodies to pull down rebounds. The Aztecs have Bradley, Mensah and Pulliam to counter, however, and Mensah might be the best rebounder in this game.

While I think Georgetown has some talented players, San Diego State is the more battle tested team. If you've read my pieces in the past, you know I put a lot of stock upon that. Sometimes it makes sense, other times it doesn't really matter. Depends upon the individual team. But I think there is something to playing a tougher schedule, rather than just having plenty of success against cupcakes, even if you lose one or two along the way. Losing sometimes builds character. San Diego State lost to BYU, a team likely to be an NCAA Tournament team. You learn a lot more about yourselves as a team in a game of that magnitude than you do beating the likes of UC Riverside, etc. I think the Aztecs have more big-game experience, and it will get them through this one, while Georgetown uses this loss to get better later in the season.