The Louisville Cardinals (3-1) and Mississippi State Bulldogs (4-0) meet in the Baha Mar Hoops men's basketball showcase Thursday at 9:30 p.m. ET at the Baha Mar Convention Center in Nassau, The Bahamas. The game can be viewed on CBS Sports Network.

Who did Mississippi State athletics pay to not only dominate the television with the Egg Bowl against rival Ole Miss in football at 7:30 p.m. ET on Thanksgiving night, but now they're on in a showcase basketball game, too? That's one way to get your brand out there.

Louisville has won three of four games overall, topping Detroit Mercy last time out by a 73-67 score on Saturday, but they came nowhere near covering a 16.5-point number as the UNDER connected. Mississippi State has played four games, and won four games. The most recent victory came against Morehead State of the OVC on Sunday, covering a 14-point number as the UNDER cashed. That's been a common theme for the Bulldogs, holding three opponents to 49 or fewer points so far.

We should see few fireworks in The Bahamas, at least between these two clubs. Neither is particularly explosive, and would rather be more methodical and pick and choose spots to turn it up.

Bet in Louisiana
Bet in Tennessee
Other Betting States

The Cardinals have played four games to date, winning three and covering just one. This team lost at home against Furman on Nov. 12 by an 80-72 score in overtime as nine-point favorites. The Cardinals bounced back to top Navy on Nov. 15, 77-60, and they eased by Detroit Mercy last time out by a 73-67 score.

Louisville has just one player averaging double-digit points, and that's G Noah Locke, who is good for 16.0 PPG. The next best player on the roster is F Matt Cross with 9.0 PPG. These Cards definitely won't be confused with Denny Crum's 1986 Cardinals, led by Purvis Ellison, rolling to a title over Duke. This is a team which takes its time working down the court, averaging just 73.5 PPG despite facing the likes of Southern U, Furman (a loss), Navy and Detroit Mercy. That's not exactly a murderer's row of opponents.

Louisville has managed just one cover so far, cashing as 14-point favorites against Navy on Nov. 15 at the KFC Yum! Center. No, really, that's where they play. This is their first neutral-site game since getting the gate from Duke in the ACC Tournament on March 10 last season, losing 70-56. The Cardinals are just 2-7 SU/3-6 ATS in the past nine neutral-site games dating back to the most recent meeting with Mississippi State in the NIT Quarterfinals on March 20, 2018 a 79-56 win by the Bulldogs.

The Bulldogs have won all four games and covered three times, including 66-46 against Morehead State as a 14-point favorite. The defense has locked it down, allowing 49 or fewer points on three occasions, and it's no surprise the UNDER is 3-1 for MSU to date.

Mississippi State has been a little more explosive so far, boasting four scorers with 11.3 PPG or more points to date, including G Iverson Molinar with 15.8 PPG, 5.3 APG and 4.0 RPG. The Bulldogs have boasted a nice mix of backcourt scoring options with Molinar and Shakeel Moore (13.8 PPG), as well as a solid frontcourt duo of Fs Garrison Brooks (11.5 PPG) and D.J. Jeffries (11.3 PPG).

Like the Cardinals, the Bulldogs have struggled in recent seasons on a neutral floor. Last season Mississippi State was just 4-5 SU/3-6 ATS in nine neutral-site games, including 0-3 SU/ATS in the regular season. The OVER was 6-3 in those nine neutral-site affairs. 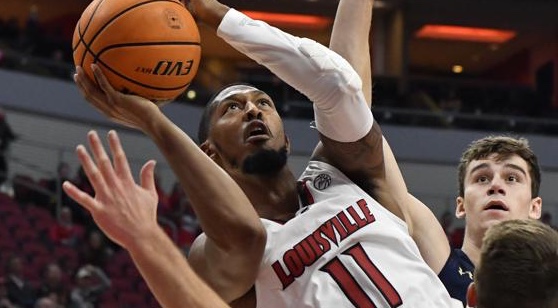 Louisville has won just two of its past nine neutral-site games dating back to March 20, 2018. (AP)

Inside the Stats - Louisville Cardinals

Inside the Stats - Mississippi State Bulldogs

This is going to be a lower scoring game in the islands, and Louisville isn't going to match up well with Mississippi State. While the Bulldogs aren't going to be confused with Gonzaga or UCLA anytime soon, this team is a little bit deeper than the Cardinals, and Mississippi State locks it down defensively. For a team which is finding it hard to get the offense going, the last thing Louisville needs is facing a deliberate team on offense and a suffocating defense.

We haven't really seen Mississippi State tested yet, although a win over a decent Montana team from the Big Sky, as well as a convincing win over Morehead State by 20 is pretty impressive. Louisville fell to Furman in OT at home, and still is a work in progress. This one won't end well. If it wins, as I expect, Mississippi State will face the winner of Maryland-Richmond over the weekend.