The Seton Hall Pirates (9-3, 0-2 Big East) hit the road to face the Butler Bulldogs (8-4, 1-0) at Hinkle Fieldhouse in Indianapolis on Tuesday. Kickoff is scheduled for 8:00 p.m. ET, and the game can be viewed on CBS Sports Network.

The last time we saw the Pirates they were ringing in the new year with a 73-67 loss against Villanova at home. After a 17-day break due to COVID issues and the holidays, Seton Hall has dropped a pair of games while also failing to cover against 'Nova and Providence on the road. In fact, Hall continues to deal with COVID problems, and they had just eight players available for the previous two losses. Seton Hall is also not practicing due to the COVID issues, so a little rust isn't shocking, it's expected, but they have played pretty well lately, all things considered. In fact, the Pirates lived up to their name, recording 17 steals from the opposition in the past two games despite being shorthanded.

The last time we saw the Bulldogs, they were posting a 63-59 win over DePaul at Hinkle on Dec. 29, their only game in the past 17 days, also due to COVID issues and the holidays. Prior to that, Butler was routed by Purdue on a neutral floor in Indianapolis on Dec. 18, falling 77-48.

With a lack of practicing, teams being a little shorthanded and the infrequency of games lately, the best bet might be the UNDER, as we could see some sloppy basketball, at least initially, before the teams get settled into a rhythm.

Seton Hall has averaged 66.0 PPG in two games since returning, and the Pirates shot just 39% or 22-of-57 from the floor against the Wildcats last time out. There were some ugly numbers, including a Kadary Richmond's 1-for-9 night, finishing with just three points and six rebounds with four assists and two turnovers. Myles Cale also was just 2-for-9 from the floor, including 1-for-4 from behind the perimeter and 0-for-2 from the free-throw line, ending up with five points. Thankfully for the Pirates, Jared Rhoden was still available, and he contributed his usual steady production, going for 13 points, six rebounds, three steals and two blocked shots.

The Pirates have won three of the past four meetings in this series, although Seton Hall lost the most recent meeting in Indianapolis on Feb. 24, 2021 by a 61-52 score. The Pirates are also 0-3 ATS in the past three tries against the Bulldogs, with two straight UNDER results in the series.

The Bulldogs covered last time out against DePaul, cashing as 2.5-point favorites in a 63-59 victory. However, Butler hasn't covered in consecutive games since last season when they connected in a pair of home games against Seton Hall and Villanova on Feb. 24-28, 2021. 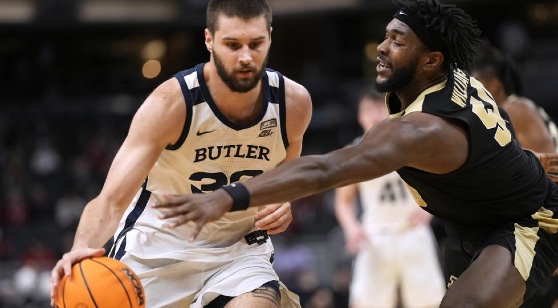 The underdog has cashed in each of the past seven meetings in this series. (AP)

Inside the Stats - Seton Hall Pirates

Inside the Stats - Butler Bulldogs

We're going to see some sloppy basketball in Indianapolis as these teams slowly get back into the swing of things. Seton Hall has played two games since returning from COVID and the holidays, although it's been a slow go and they're not quite back to 100 percent full staff. The Pirates have played with a short bench with some players still in the protocol, and now a trip to Indianapolis against the defensive-minded Bulldogs won't do them any favors.

Butler likes to slow things down to a crawl, so you have to like the UNDER. In fact, the UNDER has cashed in all but one of the past 11 games for the Bulldogs. At Hinkle, the UNDER is 7-1 in the past eight, too, and that looks like the best play on the board. And with Seton Hall struggling with a short bench, the Pirates are likely going to take another low-scoring, heartbreaking loss.