The No. 11 Iowa State Cyclones are on the road this Saturday afternoon in a Big 12 matchup against the Oklahoma Sooners. Game time on ESPNU from Lloyd Noble Center in Norman is set for 6 p.m. (ET).

Iowa State just grinded out a four-point win at home against Texas Tech while only scoring 51 points. At 13-1 straight-up on the year, the only loss was against Baylor in the Cyclones’ Big 12 opener on Jan. 1. They managed to cover in that five-point loss at home as 7.5-point underdogs. Impressively enough, Iowa State has four SU wins this season closing as the underdog.

The Sooners opened up conference play with a tight two-point win against Kansas State as eight-point home favorites. They lost to Baylor on the road this past Tuesday night by 10 points as 12-point underdogs. Oklahoma is 11-3 SU through its first 14 games. It closed as a favorite in the other two losses to Utah State and Butler in non-conference play.

This series has remained as tight as it gets in recent years at 5-5 SU over the last 10 meetings. The recent lean has been towards Oklahoma with a four-game winning streak, but I have that coming to an end this Saturday afternoon in Norman. Iowa State has proven itself as a top contender in the Big 12 this season and I really like this team’s chances to come away with the SU win in this game as a solid money line play.

The Cyclones have been able to cover in five of their last seven games even with Tuesday’s 51- 47 victory over Texas Tech as five-point home favorites. A smothering defense has kept the total UNDER in nine of their first 14 games. As mentioned, this team has posted quality wins as an underdog in non-conference play. That list includes Memphis and Iowa.

Other key players in this lineup include guards’ Gabe Kalscheur (10.2 points) and Tyrese Hunter(9.6 points). Hunter leads the team in both assists (4.9) and steals (2.0) a game. They are each averaging at least 30 minutes of playing time through all 14 games.

The Cyclones are averaging 71.4 points a game and shooting 44.7% from the field and 33.6% from three-point range. They are pulling down 36.1 rebounds a game, including 11 on offense. Iowa State’s biggest strength remains a defense that is holding opposing teams to an average of 56.9 points per game.

At 11-3 SU, the Sooners have been less reliable as a betting team with a 7-7 record ATS. Covering against Baylor on the road was an impressive feat, but they escaped with the other conference win against Kansas State at home. The total has gone OVER in nine of 14 games this season and in five of the Sooners’ last seven contests.

This lineup runs deep in scoring with five different players averaging at least nine points a game. Forward Tanner Groves tops that list with 14.2 points while pulling down a team-high six rebounds a game. Guards’ Umoja Gibson (12.6 points) and Elijah Harkless (10.2 points) round out the top three.

Harkless led the way against Kansas State with 21 points. He is one of the team’s best shooters at 44.4% from the field. Gibson is Oklahoma’s best outside shooter. He has connected on 37.4% of his team-high 99 three-point attempts.

Overall, the Sooners are shooting a solid 50.5% from the filed while converting on 35.5% of their three-point shots. They have made good on 75.3% of their foul shots this season. Oklahoma matches up well on offense with 74.4 PPG and, at the other end of the court, it is allowing an average of 61.8 points a game. 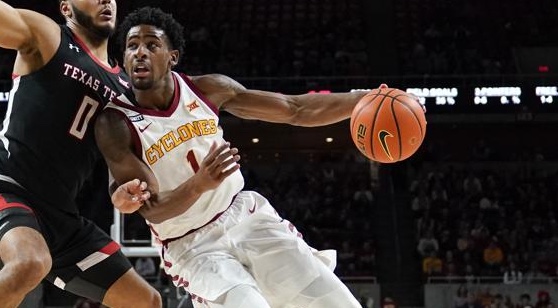 Iowa State has covered the spread in four straight games after failing to cover the game prior. (AP)

Playing Oklahoma on the road will be a great test to see just how good Iowa State is this season. Yet, this is a test I believe it will pass with flying colors and a winning money line bet at your favorite online sportsbook.

Win or lose, the Cyclones have been able to cover in seven of their last 10 games against the Sooners. The total has gone OVER in three of the last four games between the two.