In a Big 12 showdown late Saturday afternoon in Lubbock, the No. 6 Kansas Jayhawks go on the road to face the No. 25 Texas Tech Red Raiders. The scheduled 4 p.m. (ET) tip from United Supermarkets Arena is one of Saturday’s featured matchups on ESPN2.

Kansas ran its current straight-up unbeaten streak to eight games with Tuesday night’s 11-point win over Oklahoma State closing as a 6.5-point road favorite. This was the Jayhawks’ Big 12 season opener after going 11-1 SU in non-conference play. The only blemish on that record was a stunning one-point loss to Dayton on Nov. 26 as heavy 16-point favorites.

The Red Raiders are coming off a four-point loss to Iowa State closing as five-point road underdogs in their Big 12 opener. They are 10-3 SU overall with the other two losses coming against Providence and Gonzaga. This is a brutal start in conference play for Texas Tech with Baylor on the road up next on the schedule. Playing Kansas at home is the only thing that might keep Saturday’s game close.

Each of these teams have the ability to put points on the board in bunches, but I am looking for a pure defensive battle on Saturday in Lubbock. The Red Raiders’ best chance to come away with a win is by keep Kansas well below its scoring average. My lean is towards the Jayhawks winning this game SU. However, my best bet is the UNDER on the current total line.

Along with the 12-1 SU start, Kansas has been less successful ATS at 7-6. However, it has been able to cover in five of the last seven games. The total has stayed UNDER or ended as a PUSH is four of the team’s last six outings.

The Jayhawks overcame a slow start in Tuesday’s win after missing 19 shots in a row to close out the first half. They went on to outscore the Cowboys 45-34 over the final 20 minutes of play to secure the win. Forward David McCormack finished with a game-high 17 points while going 7-for-13 from the field.

Guard Ochai Agbaji added 16 points to the winning cause. He remains the team’s leading scorer with 20.2 points per game and he is shooting 52.9% from the field. He is also the Jayhawks’ best outside threat with a 45.1 shooting percentage from three-point range. Guard Christian Braun is next on the list with 16.8 PPG. He has shot a blazing 57.6% from the field this season.

Kansas has a 50.7 field goal percentage and it is shooting 37.2% outside the three-point line. The only concern on offense would be the 69.6% shooting average from the free throw line. The Jayhawks are ninth-highest scoring team in the nation with 84.3 PPG. They are holding opposing teams to 66.6 points a game on defense.

Texas Tech failed to cover the closing spread in four of its previous six games before the tough loss to Iowa State. More notable heading into this game is the total staying UNDER in each of the Red Raiders’ last six outings. Win or lose, they have scored an average of 64.5 points a game during this same span. This compares with a season scoring average of 75.8 PPG.

Guard Terrence Shannon Jr. remains the team’s leading scorer on paper with 14.3 PPG. However, he continues to miss playing time with a back injury. To make matters worse, guard Kevin McCullar (13.5 points) has also been out of the lineup due to injury.

Guard Davion Warren picked up the slack against Iowa State with a team-high 12 points in that defensive struggle. He is one of the team’s better shooters with a 46.1 field-goal percentage while converting on 32.5% of his 40 three-point attempts.

Texas Tech is shooting 47.4% from the field and 33.9% from three-point range. The Red Raiders are averaging a solid 40.2 rebounds with 12.9 a game on offense. They are giving up an average of 57.6 PPG as one of the better defensive teams in the nation. 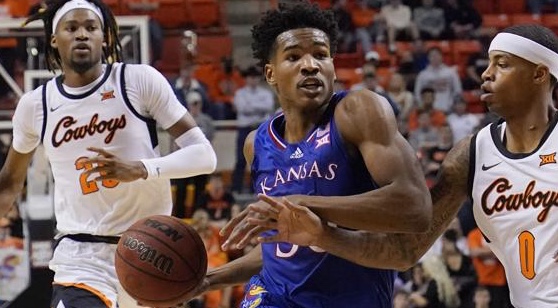 Kansas has gone OVER the point total in eight of its last 13 games. (AP)

The last three meetings between these two conference foes have stayed UNDER the closing total line with neither team scoring more than 67 points. I expect the same kind of outcome on Saturday.

Recent trends fall in line as well with five of the Red Raiders’ last six home games staying UNDER. Over the Jayhawks’ last five games on the road, the total has stayed UNDER in three of those contests.