Saturday afternoon’s Big East college basketball betting action gets underway with a matchup between the UConn Huskies and the No. 24 Seton Hall Pirates. The 12 p.m. (ET) tip from the Prudential Center in Newark, New Jersey will be covered nationally on FOX.

The Huskies will be playing their first game since beating Marquette by eight points as 5.5-point road favorites on Dec. 21. They started play in the Big East by losing to Providence by four points as 7.5-point favorites at home. The recent up and down nature of this team at 10-3 straight-up overall coupled with the added time off makes it hard to see which direction this team is headed.

Seton Hall dropped its first two conference games to Providence on the road and Villanova at home. The Pirates snapped that brief skid by breezing past Butler by 15 points on Tuesday night as 3.5-point favorites on the road. They match Connecticut at 10-3 SU overall but tend to play at a much higher level of consistency. The major concern for this team is a somewhat depleted bench due to illness and injury.

Despite the fact that Seton Hall has been playing short-handed its past few games, the team’s starters continue to step-up their level of play. Keeping the game close against Villanova last Saturday and cruising past Butler earlier this week emphasizes this point. This is an important game for the Pirates moving forward and I like their chances to come away with the win both SU and against the spread.

Head coach Dan Hurley made note of the extended layoff due to Covid-19 issues. How his players respond in their return to play is a huge question mark with even the coach noting the physical and mental toll this situation has taken on his team.

Coming off the break, guards’ R.J. Cole (16.3 points) and Tyrese Martin (14.4 points) will be tasked to step up their games. Forward Adama Sanogo (14.6 points) remains out of the starting lineup due to an abdominal injury.

Connecticut has averaged 79.3 points a game this season while holding opposing teams to 62.3 points a game on defense. The Huskies are shooting 43.9% from the field and 33.9% from three-point range. They have converted on 74.2% of their shots from the free throw line. With a total of 41.9 rebounds a game, an average of 14.1 rebounds have been off the offensive boards.

The Pirates have also had their issues with Covid-19 but they have endured through missed practices and a depleted roster. The solid win over Butler proves the point with one of their best players (Tyrese Samuel) out of the lineup. He remains questionable for Saturday’s contest.

After failing to cover in those two conference losses, Seton Hall is 5-2 ATS over its last seven games. The total has stayed UNDER in three of the last five contests. The Pirates are averaging 77.2 PPG but that total has slipped down to 68.8 points in those previous five games.

Guard Jared Rhoden remains the team’s leading scorer with an average of 16.4 points a game. He is shooting 40.9% from the field while converting on just 27.9% of his 43 attempts from three-point range. Guard Bryce Aiken (12.2 points) is the second leading scorer and guard Jamir Harrisis Seton Hall’s best outside shooter at 35.7% from three-point range.

The Pirates are shooting 44.2% from the field and 31.6% from three-point range. They average 39.1 rebounds and 11 assists per game. Defensively, they are holding opposing teams to 62.9 PPG. 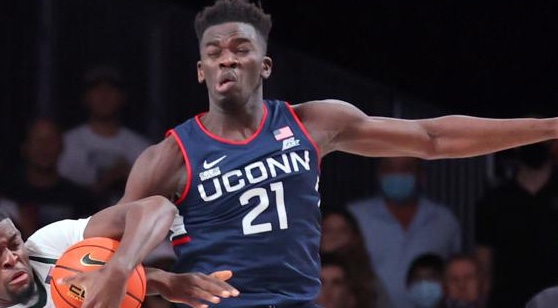 The point total has gone UNDER in six of the last nine games played between Seton Hall and UConn. (AP)

The road team won both meetings last season (SU and ATS) in Connecticut’s return to the Big East with the total split 1-1. The Huskies have the SU 8-2 edge over the last 10 meetings going all the way back to 2008.

This Saturday’s game is filled with quite a few unknowns but I still like Seton Hall’s chances to come away with a win at home that covers the current spread. The recent loss at home to Villanova snapped the Pirates’ SU seven-game winning streak at the Prudential Center while going 6-1 ATS.