The Red Raiders are coming off a tremendous week, posting victories and covers with OVER results at home against Iowa State and West Virginia. The victory over the Mountaineers on Saturday was particularly impressive, hitting 24-of-59, or 41%, from the field, while committing just nine turnovers to 16 for the Mountaineers. Texas Tech also outrebounded West Virginia 35-25, and it pulled down 36 rebounds to 31 for Iowa State in the previous out. And if Texas Tech can average 10.0 turnovers per game, that's a respectable total.

Kansas will be searching for revenge after losing 75-67 down in Lubbock as a seven-point favorite on Jan. 8 as the OVER connected. Since that setback, the Jayhawks have picked up four consecutive victories, although Rock Chalk is just 1-3 ATS during the span. KU picked up a 78-75 win over rival Kansas State last time out, hitting 26-of-59, or 44%, from the field, while hitting just 5-of-21, or 24%, from behind the 3-point line. The Jayhawks dominated the boards, pulling down 44 rebounds to just 19 for the Wildcats. That sort of margin will be the recipe for victory most evenings.

The Red Raiders roll into this one with a 6-1 ATS mark across the past seven games overall, with the lone non-cover coming Jan. 15 at Kansas State as a 4.5-point favorite. Texas Tech has picked up covers and wins in consecutive outings, while hitting the OVER in back-to-back contests. The OVER hasn't hit in three or more consecutive contests since a 5-0 run from Dec. 29-Jan. 13.

For totals, the UNDER has connected in four consecutive games on the road, while going 6-2 in the past eight following a straight-up victory. The UNDER is also 4-0 in the past four at home against teams with a winning home mark.

On the flip side, the Jayhawks have managed two non-covers in the past two games, while going 1-4 ATS across the past five games overall. The last time Kansas had three straight non-covers was Nov. 25-28 during a three-game run on a neutral floor. 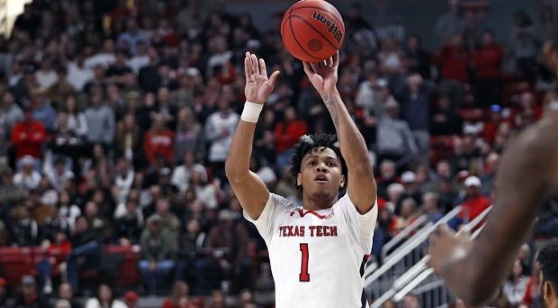 Texas Tech has covered in seven of the past eight games against winnings teams. (AP)

Texas Tech limped into the Jan. 24 meeting with Kansas in Lubbock with Terrence Shannon Jr., the team's leading scorer, and Kevin McCullar, at the time, the second-leading scorer, sidelined due to injuries, so it was looking rather grim. However, the Red Raiders banded together with a short bench, pulling off a stunning victory minus two top scorers. The Red Raiders registered the 75-67 victor as seven-point 'dogs.

Things are certainly looking good for another cover in this rematch. Kansas enters the game 1-4 ATS across the past five outings, while Texas Tech is 6-1 ATS across the past seven games overall. The Red Raiders are also in a much better place with Shannon and McCullar back in the starting line for this game. Will Texas Tech pull off the season sweep with a road win at The Phog? It's doubtful. But don't be surprised to see this one decided in the final minute, and that's risky business for the Jayhawks. They rank just 192nd in the country with a 70.7% mark at the free-throw line. If it comes down to a game at the charity stripe, the Red Raiders have a puncher's chance.