Marquette is playing its best basketball of the season, rattling off six consecutive victories, including a 73-72 win over the Pirates at Fiserv Forum in Milwaukee on Jan. 15 as a two-point underdog as the UNDER connected. Not only are the Golden Eagles 6-0 SU in the win streak, they're also 6-0 ATS. The team's last loss was a 75-69 overtime setback to Creighton on New Year's Day, and the last setback in regulation came on Dec. 21 against Connecticut, a 78-70 loss.

Seton Hall was drummed 84-63 by St. John's on Monday, as the Red Storm returned the favor following a 66-60 win in New York City against the Johnnies in the front end of the home-and-home set. The Pirates have really started to sink lately, winning just once in the past four games, and three times in the past eight. Seton Hall is also 2-6 ATS across the past eight games overall, while cashing the UNDER in each of the previous three outings.

Marquette is on a six-game win and cover streak, including a victory over Seton Hall on Jan. 15. While the Golden Eagles won the most recent meeting, they're just 1-6 SU in the past seven meetings with just two covers in the previous eight matchups.

As far as the total, the UNDER has connected in 15 of the past 22 games overall for the Pirates, while going 21-9 in the past 30 as a favorite. The UNDER is also 9-1 in the past 10 following a straight-up loss, while going 5-2 in the past seven against teams with a winning overall record. The OVER has hit in six of the past eight for Seton Hall in Newark. 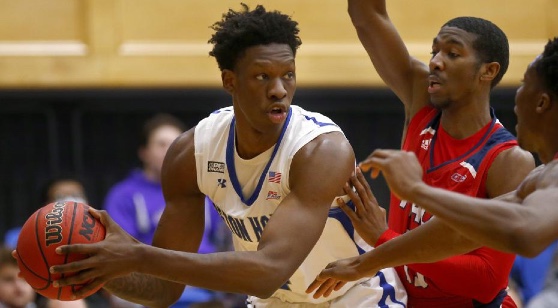 Seton Hall has covered just five of the past 17 games at home. (AP)

Seton Hall was really missing Bryce Aiken, who remains in the concussion protocol since the first meeting with Marquette back on Jan. 1 when he dropped 28 points. He was rolling right along with 22 or more points in three straight games before the injury, so his loss has been huge for the offense. It showed in a 21-point loss to the Johnnies last time out.

Marquette eased past Seton Hall in the first meeting when the Pirates were 100 percent. They're not fully healthy right now, and Aiken will be missed. The Golden Eagles are red hot, rattling off six straight wins and covers, and catching five is a nice value for the road side. Remember, the road team is 23-8-1 ATS in the past 32 meetings in this series, with the underdog covering 20 of the past 26 in this series. Look for that trend to continue.