The Sooners are on a four-game slid, including a 65-51 setback against Baylor at home last time out on Saturday. The scoring output was the team's lowest of the season. The team had just posted 52 points for a new low on Jan. 11, kicking off the four-game slide at Texas in a 66-52 loss. OU is has also won just once in the past six games while also going 3-3 ATS during the streak, and the UNDER has cashed in each of the four games during the current skid.

The Mountaineers have dropped three in a row, including a 78-65 loss at Texas Tech last time out as eight-point underdogs. The OVER has connected in each game during the team's three-game slide, as they have allowed 77 or more points in each of the outings during the losing streak against ranked teams. It's last win was 70-60 over Oklahoma State on Jan. 11 as 2.5-point favorites. West Virginia is just 2-4 SU/1-5 ATS across the past six outings, while hitting the OVER in six of the past seven overall.

The Sooners have scored 58 or fewer points in three of the past four games, so it's no surprise the UNDER has cashed in each of the outings. The good news is that the Sooners have yielded 67 or fewer points during the four-game skid, including just 59 points in an overtime loss to TCU. So the defense has been locked in, OU is just struggling with its shot. Oklahoma shot 45% from the field in the loss to Baylor, but turned it over 25 times while recording just one blocked shot. The good news is that the Sooners outrebounded the Bears 29-to-24.

Oklahoma is 3-8 ATS in the past 11 games on the road, but the good news is that the Sooners have cashed in seven of the past 10 games following a non-cover. For totals, the UNDER has cashed in four straight, while going 8-3-1 in the previous 12 against teams with a winning overall mark.

In this series, Oklahoma has won and covered four in a row since West Virginia's last win in the series on March 13, 2019 in the Big 12 Tournament. The last regular-season win for the Mountaineers came in Morgantown back on Feb. 2, 2019 as a 2.5-point underdog. The OVER is 4-2-1 in the past seven meetings in this series.

The Mountaineers have lost by nine or more points in each game during the losing streak, and West Virginia is 1-5 ATS in the past six games overall. West Virginia has posted a 10-1 SU mark in 11 games at WVU Coliseum this season, while posted a respectable 5-3 ATS mark in the past eight games at home. 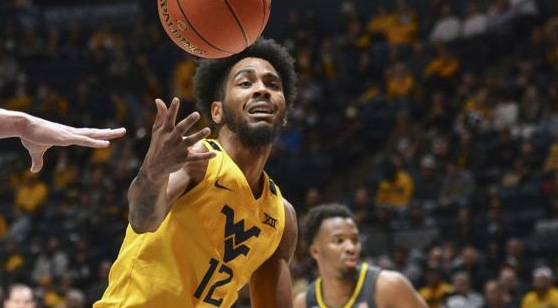 The Mountaineers are 1-5 ATS in the past six games against teams with a winning overall record. (AP)

INSIDE THE STATS - WEST VIRGINIA MOUNTAINEERS

Something's gotta give here, as we have two ice-cold teams squaring off. Somebody is going to come away with a much-needed victory, and the losing skid is going to continue for the other team. While Oklahoma has dropped four in a row, the past three setbacks have been against ranked foes, with two of the three games by three or fewer points. The Sooners play a good brand of defense, and once they stop turning the ball over so much they're going to get it done. They're not as far away from winning as West Virginia.

The Mountaineers have dropped three in a row by an average of 16.0 PPG, and the defense has been non-existent. Even a methodical, slow-paced offense like the Sooners will be able to score the basketball. Until West Virginia starts to show signs of a turnaround, keep fading them.