The Colorado State Rams (16-2, 6-2 Mountain West) travel to meet the Wyoming Cowboys (16-3, 5-1) in a Mountain West Conference tilt at Arena Auditorium in Laramie, Wyo. on Monday night. Tip-off is scheduled for 8:00 p.m. ET, and the game can be viewed on FOX Sports 1.

The Rams of Colorado State are looking to bounce back from an 88-74 humbling at the hands of UNLV in Fort Collins last time out on Friday night. The 88 points allowed were a season high. The Rams hit 43% (25-of-58) from the field, while going 41% (9-of-22) from behind the 3-point line, while hitting 71% (15-of-21) from the charity stripe. The Rams took very good care of the ball, turning it over just seven times, but UNLV managed to outrebound Colorado State by a 37-to-28 margin.

After a 65-62 loss at Boise State last Tuesday, the Cowboys rebounded with a 63-61 win at Air Force, although Wyoming didn't come close to covering as 7.5-point favorites. Wyoming is now 1-3 ATS across the past four games, while the UNDER has hit in each of the past two. The Cowboys hit 40% (21-of-52) from the floor, while managing a dismal 12% (2-of-16) from downtown, while racking up 34 rebounds to 24 for the Falcons.

Colorado State was tripped up 88-74 last time out on Friday, losing by 14 instead of cover a 14-point number. While the Rams are 5-1 SU across the past six games still, they're just 3-5 ATS over the previous eight outings. 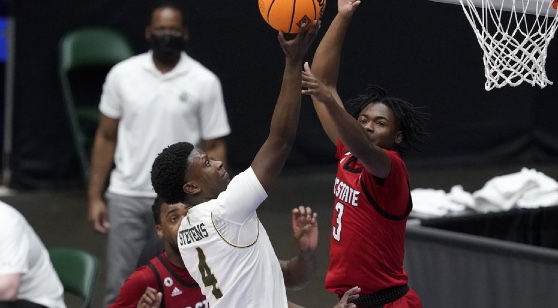 The UNDER has connected in nine of the past 11 games overall for Colorado State. (AP)

INSIDE THE STATS - COLORADO STATE RAMS

INSIDE THE STATS - WYOMING COWBOYS

The books feel this is going to be a coin-flip game, and the numbers certainly back that up. Colorado State has won five of the past six games in this series, although Wyoming has covered four of the past five outing. Oddly enough, the road team has won four straight meetings in this series, with Colorado State picking up a sweep in a back-to-back COVID set last season in Laramie from Feb. 4-6, 2021.

The underdog has connected at a 9-2-1 ATS clip across the past 12 games overall. However, the 'dog is catching just 1.5 points in this one, and I think Wyoming is a little deeper. The Cowboys have four scoring options with double-digit point averages per game, while the Rams really rely on just two players to do all of their heavy lifting. I think the Cowboys are able to finally get a home win, the first in five tries in this series.