The Duke Blue Devils (17-3, 7-2 ACC) travel to meet the Notre Dame Fighting Irish (14-6, 7-2) at the Purcell Pavilion in South Bend, Ind. on Monday for an Atlantic Coast Conference showdown. Tip-off is scheduled for 7:00 p.m. ET, and the game can be viewed on ESPN.

The Blue Devils have registered three consecutive victories since an overtime loss and wake-up call at Florida State on Jan. 18. Duke has covered two of the past three games, while hitting the UNDER in three straight outings. Duke enters with 71 or more points in seven straight outings.

Duke hit 44% (30-of-68) against Louisville from the field last time out, while knocking down 30% (6-of-20) from behind the 3-point line. The Blue Devils were fortunate to win after an absolutely atrocious 44% (8-of-18) mark from the free-throw line. The good news is Duke turned it over just seven times while outrebounding Louisville by a 44-to-32 margin.

Notre Dame has registered four consecutive victories while covering each of the past three outings. That includes a 69-65 victory against Virginia on Jan. 29 while covering a three-point number. The Irish hit 47% (22-of-47) from the field, while going 43% (10-of-23) from behind the arc. Notre Dame also turned it over just seven times, while coming up on the short end of a 36-to-25 rebounding margin.

Duke has alternated covers and non-covers in each of the past five outings, while covering last time out. This will be Duke's fifth true road game this season, going 2-2 SU/ATS in the previous four road trips. The UNDER has cashed in three of the past four on the road.

For the Blue Devils, G Trevor Keels is a question mark for Monday's game due to a calf injury. He hasn't played since Jan. 18 at Florida State, missing the past three games.

The UNDER has connected in three straight outings for the Blue Devils, and six of the past eight games overall. The previous three meetings in South Bend have also resulted in three UNDER results. In this series, Duke has won and covers in seven of the past eight games, with the Irish coming up with a win at Cameron Indoor Stadium last season on Feb. 9, 2021, winning 93-89 as 7.5-point underdogs.

Notre Dame has picked up 10 victories in the past 11 outings, with a 79-73 loss at Virginia Tech on Jan. 15 as the only setback during the span. The Fighting Irish are 3-0 ATS in the previous three games, and 7-1 ATS across the past eight games overall.

As far as totals are concerned, the OVER-UNDER has alternated in the past seven outings, with an OVER result against Virginia last time out. The OVER is 7-3-1 in the past 11 games overall, while going 6-2 in the past eight against winning teams. Notre Dame is also 5-1 in the past six at home against a team with a winning road record. 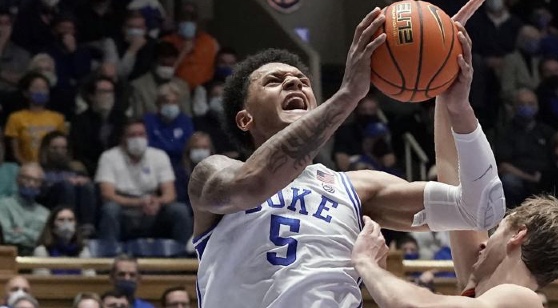 The favorite has cashed in seven of the past eight meetings in this series. (AP)

The Blue Devils should be able to figure out a way to get it done, although has really had some difficulties on the road so far this season. It doesn't help that Keels is a question mark. He is the team's third-leading scorer with 11.9 PPG, while posting 3.6 RPG, 3.2 APG and 1.9 SPG in his 17 games. If he is unable to play again, Mark Williams will have to serve as the tertiary scoring option behind Paolo Banchero and Wendell Moore Jr.. Jeremy Roach has also stepped up with 7.7 PPG, 7.7 APG and 3.7 RPG in three games without Keels.

The Fighting Irish are on fire lately, so this won't be an easy battle in Coach K's final showdown against protege Mike Brey in South Bend. Brey was an assistant under K in Durham from 1987-95 before taking the head coaching job at the University of Delaware. Duke has dominated this series in recent seasons, going 7-1 SU/ATS in the previous eight outings. Look for Notre Dame to play Duke tough, but for the Blue Devils to come away with the narrow win in a lower-scoring affair.