TCU picked up a signature victory against LSU in the Big 12/SEC Challenge on Saturday as a 3.5-point underdog in Fort Worth. It was a nice rebound after falling 73-50 against Texas last time out in a conference tilt.

For Oklahoma, they were on the short end of an 86-68 loss at Auburn in a Big 12/SEC Challenge matchup against the top-ranked team in the nation. The offense has really struggled lately, and the Sooners have managed just one win in the past six games overall while going 2-4 ATS.

The Horned Frogs bounced back after getting bombed by Texas at home, picking up the win and cover as an underdog against LSU last time out. TCU have been cover kings lately, going 5-1 ATS across the past six games overall, while going 9-2-2 ATS across the past 13 games.

The Horned Frogs won the first meeting this season on Jan. 15 in Fort Worth, picking up a 59-58 win in overtime as 1.5-point underdogs as the UNDER connected. That snapped an eight-game losing streak to the Sooners, while Oklahoma entered 4-1 ATS in the previous five meetings.

The Sooners were pounded at Auburn by 18 points, while losing five of the past six games overall. They're also 2-4 ATS during the previous six games overall, too. The 86 points allowed were a season high, too.

Oklahoma has managed a 3-10 ATS in the past 13 as a home favorite, while going 5-15 ATS in the past 20 overall when favored. As far as totals, the OVER is 5-2 in the past seven at home for Oklahoma against teams with a winning road record. 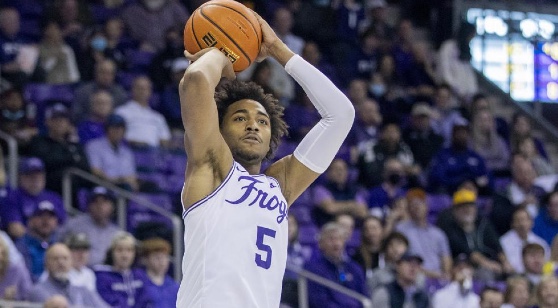 Texas Christian has covered in five of the past six games against winning teams. (AP)

INSIDE THE STATS - TCU HORNED FROGS

The Sooners will be back on their home floor, but it might not necessarily matter. Oklahoma fell to Baylor on Jan. 22 by a 65-51 score, and 67-64 to Kansas on Jan. 18 at home. Those two home losses came on the the heels of its OT loss at TCU on Jan. 15 as a 1.5-point favorite. The UNDER cashed in each of those games, too. Oklahoma has scored 68 or fewer points in five of the past five games, and it's no surprise the UNDER is 4-2 during the span.

TCU is flying high after dumping a good LSU team, and they'll use that as a springboard for this road trip to Norman. The Horned Frogs have won and covered its past two games against ranked opponents, including a 59-44 win at Iowa State as a six-point underdog on Jan. 22 as the UNDER cashed. Look for the Horned Frogs to get it done, and they're worth a look on the money line for the chance to double up. If not, taking the points is a slam-dunk play.