The Mountaineers are skidding hard, falling in five consecutive games dating back to Jan. 11. That skid includes a 77-68 loss at home against Baylor as 4.5-point underdogs in Morgantown as the OVER connected. West Virginia had three scorers go for 17 or more points, including the usual suspects Sam McNeil and Taz Sherman, while Malik Curry stepped up with 19 points off the bench to serve as a tertiary scoring option.

West Virginia fell 77-68 at Arkansas in the Big 12/SEC Challenge as the OVER connected over the weekend. The Mountaineers hit just 38% (23-of-60) from the field, while knocking down just 27% (7-of-26) from downtown. They ended up with just nine turnovers, which was a positive, while the Razorbacks dusted the Mountaineers 41-26 on rebounds.

Baylor was cooled off at Alabama in the Big/12 SEC Challenge, losing 87-78 as three-point favorites as the OVER cashed. That snapped a 3-0 SU/ATS run for the Bears. The Bears are just 2-2 SU/1-3 ATS in four conference games at home, although they crushed Kansas State 74-49 as a 12.5-point favorite last Tuesday in Waco as the UNDER cashed.

The Mountaineers last posted a cover Jan. 11 against Oklahoma State, scoring 68 or fewer points in each of their five games during the current losing streak. They have also allowed 77 or more points in four of the past five outings, cashing the OVER in all five games during the skid, and eight of the past nine games overall. Again, that includes the first meeting against Baylor on Jan. 18.

L.J. Cryer, the team's leading scorer, is a question mark, as apparently his surgically-repaired foot is acting up. He missed the Alabama game due to soreness, so obviously if he cannot go, that changes the outlook for Baylor. 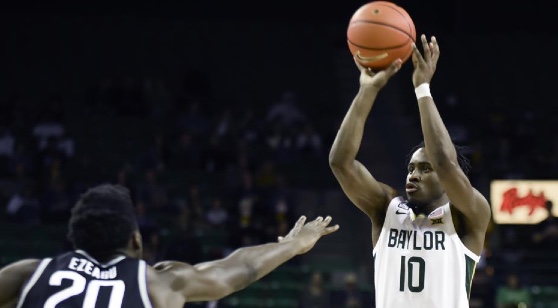 INSIDE THE STATS - WEST VIRGINIA MOUNTAINEERS

West Virginia is really in a nosedive, and a trip to Baylor won't be the elixir to cure its ills. The Mountaineers might catch a break with Cryer still battling soreness, and he might sit out a second consecutive outing. However, even if Cryer cannot go, the Bears have Akinjo, Adam Flagler, Matthew Mayer and company who are more than capable of picking up the slack.

Until the Mountaineers start to show some signs of life, keep fading them. In addition, Baylor should be able to roll up a healthy amount of points against the defensively-challenged Mountaineers, with or without Cryer.